As squash players the lunge is something we are all familiar with.  I was practicing movement in to the front court with the help of my coach and one thing that we were working on specifically was how far forward the leading knee can go. If your leading knee goes too far you can lose balance on the shot you are playing.  Also if you go too far you will also not have the same strength to push back out of the corner. 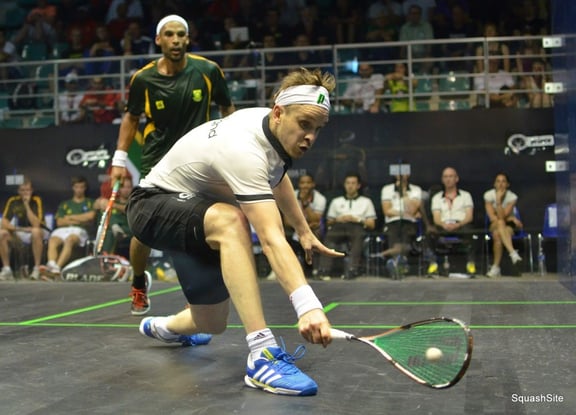 The first example is James Willstrop lunging for the ball.  Look at the position of his knee in relation to his foot. When I was discussing it the pro at our club we were focusing on being able to see the laces of your shoe.  That is a good visual clue on how you are doing while you are practicing your movement. If you are looking at it like we are now from a picture you can look at position of the knee in relation to his ankle. If you drew a straight line down from the front of his knee it is almost perfect aligned with his heel.  This puts him in a very stable position for hitting the ball.

This second image, of Nick Matthew shows you once again a very similar position. While lunging Nick's leading knee has not gone past what would be a 90 degree angle. The front of his knee looks to be very close in relation to where his heel is.  This is once again a strong position that is providing him balance to hit this shot.  It is also going to leave him in a good position to push back. One you have let the knee go too far you lose strength and will not have the same power on the push back out away from the front corner. One of the major differences between professional players and amateurs is their movement away from the ball

This is an incredible picture of Ramy Ashour at full lunge for a ball.  It is an absolutely amazing picture.  I included this mostly because of how well it captures the effort and energy he has put in to retrieving this shot.  Even as stretched out as he is lunging for the ball here it still looks the angle at his knee has not quite reached 90 degrees though.  He is so stretched out had to put his left hand down for balance but he has kept his knee from going so far forward that he can't push back out from this shot.  I did not see this point on live stream it was broadcast but you can just imagine him springing back up from this incredible get!

So when practicing lunging to the ball be conscious of how far you let your knee go forwards. Look for your shoe laces on the forward leg, if you can't see them you have gone too far.  Proper position while lunging will leave you well balance and with your leg in a good position to really power back away from where you were going and back to the centre of the court.