Amazing Season Finale - Can Roger Federer make it back to #1?

33 year old Roger Federer got to number 2 in the rankings of ATP by winning the masters in Shanghai. But what does that even mean? It actually means we are going to have a great season finale. If Federer wins out the last 3 tournaments ( Basel, Paris, ATP World Tour Finals ) he will get to number 1 by the end of the season no matter what. Roger is just 990 points from the number 1 Novak Djokovic and there is 2525 points that Federer could get by winning at his home-town Basel, then in Paris, in the ATP World Tour finals and in the Davis Cup. If Federer wins one of the final three tournaments and gets at least to quarter-finals in Paris or Basel ( or finalist in London) plus a Davis Cup, he takes the number one. But If Djokovic wins either of his final two tournaments he'll finish number 1.

There are 2 tournaments before the long waited ATP WTF in London! (World Tour Finals) . The first one is in Basel, Switzerland, where Roger, Nadal, Wawrinka, Raonic, Dimitrov, are expected to play. In Switzerland we will get to see a Nadal who is returning to the indoor courts of Basel for the first time in 10 years, as he looks to continue his comeback. We will also see the home-town hero Roger Federer that has a 51-9 record and is looking to win the title for the sixth time. Wawrinka who will also be playing in his own country is looking to win the title for the first time in his 11th appearance. Finally, Dimitrov and Raonic will be looking for valuable points, they are bidding to qualify for the ATP WTF for the first time and they are not alone in that battle, David Ferrer and Andy Murray who will be playing the same week ( in the Valencia Open 500) will be stepping into the picture while they will try to do the impossible to take their spots at the ATP WTF round robin, where only the top 8 players of the year can play. 500 points will get the winner in Basel but it wont be Djokovic. If Federer doesn't make it at least to the quarter finals at home, he might be saying good bye to being number 1 at the end of the year. All aside, everyone in Basel will be expecting Federer to take what is his.

The second ATP tournament before the WTF is in Paris, eight of the top 10 players are expected to play, including the famous trivalry: Roger, Rafa and Novak. This is the last tournament of the regular men's tennis season and it is a prestigious title, it is the final place where players can clinch one of the remaining qualifying spots in the ATP WTF. If Federer can advance deep into each of his tournaments, while outlasting Djokovic, he could be number 1. This is not an easy task for Federer, he really needs to beat the crème de la crème in his last tournaments.

There will be a cherry on top that could help Roger get some decisive points and that's the Davis Cup ( where Federer is still playing and Djokovic is not) . The Swiss team will be playing the Davis Cup final against France in France. It's not easy to determine which country will win, both countries have a great team. We will see Federer and Wawrinka play against Monfils, Tsonga, Gasquet and maybe Gilles Simon. And this tournament could be the X-Factor in the dispute for the number 1 between Federer and Djokovic. So whatever happens at the end, is going to be awesome! Let's hope the best for the best and let's watch an incredible season finale. 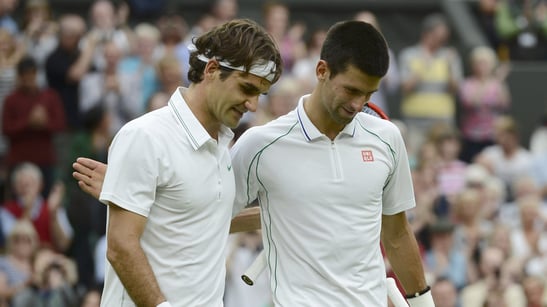