I got the opportunity to go watch the day session of the semifinals of the Rogers CUP in Toronto where the women are playing. I watched two matches the first being Sara Errani versus Simona Halep and the second being the doubles match featuring Bethanie Mattek-Sands/Lucie Safarova versus Kristina Mladenovic/Karolina Pliskova. Both matches were terrific to watch and while they both ended 2-0 they were good competitive matches.

The first match we watched, the singles match between Simona Halep and Sara Errani was the match I was most excited to watch. Simona Halep is the #2 seed at the event and as Errani is the #15 seed she was definitely favoured to win. I was hoping for a Simona Halep win I thought should would have the best chance in the finals. She was the last player to beat Serena Williams on a hard court so a Halep vs Williams final I thought would be really exciting. Errani though had other thoughts and got off to quick 2-0 lead. Simona Halep though responded nicely and leveled the match and then moved ahead. My overall observations of the match was that both women had excellent ground games. Errani’s serve though while reliable enough was not putting any pressure on Halep and Halep was often even able to put Errani on the defensive with her return; even off the 1st serve. 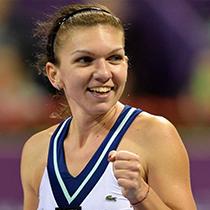 The other part of the match that seemed to play a big part was the crowd. There were a lot of Romanian flags in the crowd and a great deal of very vocal supporters of Simona Halep. At points it felt more like what I would expect of being at a European football game than a tennis match. Errani seemed a bit perturbed at points with the very vocal crown and the chair umpire had to ask for the Halep supporters to be quiet during play several times. There were times when the crowd was a bit interruptive of play but overall it was pretty exciting to be at an event where the crowd were so in to the match. While a bit over exuberant perhaps everything was in good spirit, a very vocal positive response to Halep and nothing negative towards Errani. In the end Simona Halep proved too strong for Sara Errani to overcome. The second set was back and forth near the end and featured a break by Errani near the end of the match to give herself a chance to level up on serve but was not able to hold her own serve. Simona Halep won the match 6-4 and 6-4. That put her in to the final where she would face the winner of the Belinda Bencic versus Serena Williams match.

Sara Errani plays with the Babalot Pure Drive Plus Racquet.

After the singles match I decided to go for a walk as it was extremely hot and sunny and I needed to get out of the heat. I took a walk through the different booths that our vendors had set up at the event. I stopped in to talk with the Wilson, Head, Yonex, Asics, and Babalot rep's to see how they were making out at the event. They all had nice setups of course and I was left dreaming of perhaps in the future the tent being a Control the ‘T’ Sports tent.

I picked the doubles match up near the end of the first set. The doubles team of Bethanie Mattek-Sands and Lucie Safarova took the first set 6-4. The second set was well played and enjoyable to watch. The team of Kristina Mladenovic and Karolina Pliskova had tremendous serves. Both of them are quite tall and used their height to allow them to hit a flatter harder serve and they were keeping a lot of pressure on Mattek-Sands and Safarova. I was quite amazed at the reflexes of all 4 women. There were some incredible volley exchanges. Interestingly I think overall the team of Mattek-Sands/Sararova ended up winning as they played what I would call the scrappy points a bit better and they were a bit better on ground strokes. Bethanie Mattek-Sands and Lucie Safarova won the match 6-4 and 6-4.

That ended my day at the 2015 Rogers Cup and I had a great time there. Belinda Bencic ended up defeating Serena Williams in a hard found 2-1 encounter in the night session. It was quite and upset and gives us a Simona Halep verus Belinda Bencic final. Simona Halep making the final is not a surprise but picking at Bencic to make the final at the beginning of the week would certainly have been a long shot. She beat the #4, #5 and #1 seeds to get there. We now have the last two players to beat Serena Williams on a hard court playing each other. I expect it will be an amazing final!