I was out hitting with our local pro, Dave Rowat again last week. We were working on groundstrokes and hitting specific targets.

After our customary warm-up period, Dave and I discussed strategy, and where I was hitting on the court, and why.

How to build your points in a tennis match

Dave laid out 4 sets of cones/targets on the court. The targets were all laid out between the service line and baseline on the court in 4 rows which we discussed as zones A, B, C and D.

Below is an image of a court where the targets were set up. 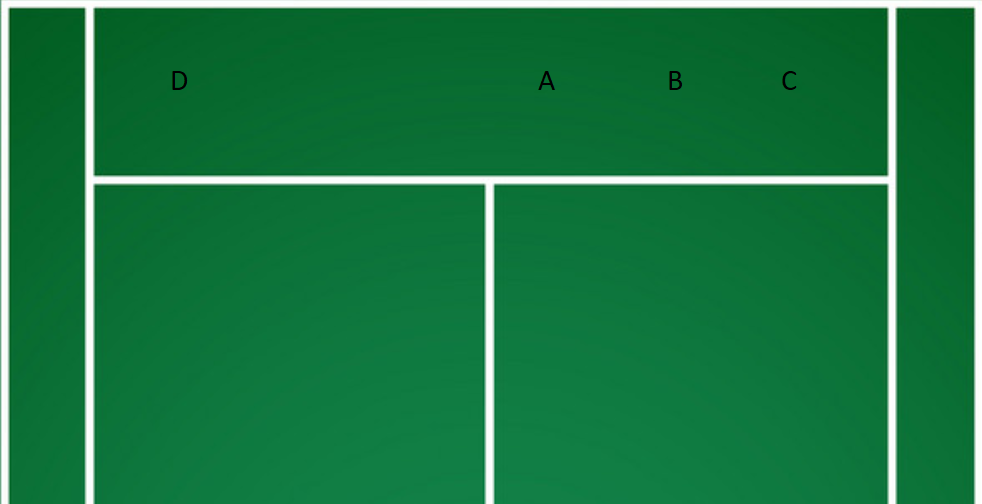 Zone A is where we discussed starting up a point on the return of serve. It was also the area to return to when a rally is not going in your favour.

Zone A, against a right-hand player, is just inside on the backhand side. You are taking angles away from your opponent. You are also forcing them to choose between forehand and backhand. Potentially, you can jam them if they don't move enough as the ball will end up in tight on their body.

This is generally not an attacking shot, it is a more neutral zone where you're limiting your opponent's options and giving them no angles to work with.

It can also be used as a variation if you have hit an attacking shot out to zone C. If you have a hit a good shot out to zone C, your opponent will likely be hurrying back so they can cover zone D. A well-hit ball to zone A while they are running across the baseline can catch them off guard and jam them.

Zone B is the beginning of your offensive hitting. You are setting up your offense.

Zones C and D are your attacking zones but should be reserved for when you have earned an opportunity to hit into them ...

You are hitting to these zones when you have forced a weaker return out of your opponent and are punishing that weak shot. You are potentially trying to win the point and if not an outright winner you are trying to force an error or a very weak return that you can finish.

Why wait to attack into zone C or D though?

It's imperative to wait to hit to these zones as your margin for error is lower and you are opening up the court for your opponent. It's not hard to cover wider shots that have little angle. If you haven't worked your opponent out of position and earned your opportunity to attack they will likely be on your wider shot quickly and you have now given them an angle to attack.

Dave and I discussed thinking of your shots as questions you are asking of your opponent. To start most of your rallies you are going to hit into zone A. Their answer will help determine your next question. Do you need to hit out to zone C or D and risk an error if they have not answered your first question, your shot to zone A effectively?

Work your way out from zone A to zone B, ask questions of your opponent and their ability to answer your questions will determine what question, shot to ask of them next ...