The topic of this article comes from a lesson I had a couple of years ago with the pro I take lessons from.

Andre Agassi was by the far the best of his generation at doing just that, taking the ball early.

Andre is my favourite tennis player in history. We're close in age and I loved watching him when I was younger when he was this rebellious, flashy player. As I grew older, and so did he, I loved the player, and the person he became later in his career.

On the court, Andre had this incredible ability to hold his position on the baseline and could take the ball on the rise consistently. It was an advantage for him positionally. It also made his opponent's life much more difficult as the ball came back to them much faster than if he was playing from further behind the baseline.

Being able to take the ball on the rise can be a challenge as it requires good timing. Your ability to read where the ball is going needs to be good as well as you have less time to get in position to hit the ball. When done well, you can return that pressure on your opponent.

When I was growing up playing, I always thought of it as a battle to hold the baseline and to try and force my opponent back from it. If I could do that I believed I was controlling play.

It's a great way to play against a baseline player that doesn't like to come in.

By holding your position, taking time away from them and pushing them back you are very likely to earn a short ball that you can attack. It gives you the opportunity to either outright win the point or to come in behind the ball to try and win the point at the net. 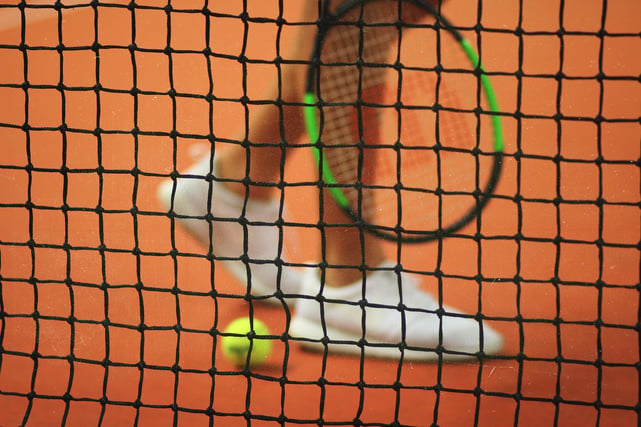 It's also a really good tactic against a player that's good at the net and does like to come in.

A player that likes to come into the net is looking for an opportunity to come in behind a ball. If you allow yourself to get pushed back off the baseline you're allowing them to come in. You're also giving them the option to finish the point with a volley that stays short.

The example from last week of my friend I played is a perfect example.
He loves to try and push you off the baseline with a high deep ball and come in behind it. Inevitably when I do give too much ground from the baseline he comes in behind that shot. I'm then faced with the option of trying to hit it by him with pace, or over him with a lob.

He's looking for me to try and hit with pace in this situation and since he has me pushed back off the baseline he plays a drop volley. He has great hands and being as deep as I am in the court I can't cover it.

If I try and hit over him with a lob I risk giving him an overhead, or as we're playing indoors right now I also risk hitting the roof. The margin for error on the lob is very slim and my chances are poor. The further back I am the harder it is for me to get the ball over him.

By holding the baseline and hitting the ball on the rise I either force him to not come in at all or I catch him mid-court on a ball that's driving down with topspin that forces him into making a very tough shot off of his feet. It very often leads to him leaving me a sitter.

If you're looking to put more pressure on your opponent you don't always have to hit harder. Hitting with your normal pace, but hitting it earlier will have the ball back to your opponent sooner and put them under more pressure. If you're playing a baseliner try and win the battle and push them back to earn a short ball. If you're playing someone that loves to volley try and keep them back by taking the ball early or at least make their first volley tough.