I was very excited to receive in to the store the new Prince Textreme Pro Warrior 600 Squash Racquet. We received it just over a month ago. I was quite interested to see if the Textreme that was added to the racquet would make the racquet feel different than previous versions of the same mold. The weight and balance of the racquet was also something that had me pretty excited about it. Its 129 gram unstrung weight and balance point of 353 mm was right around what I like. Having played with both the Prince Pro Beast 750 and the Prince Airstick 130 how the Warrior compared was also of interest to me. I have been hitting with it now for a few weeks and below are my findings. 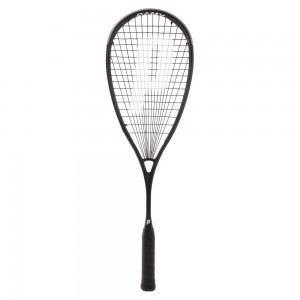 The racquet that I have been most recently playing with before the Pro Warrior was Prince’s Pro Beast. The Warrior and Beast have a lot of similarities. The weight and balance are very close. The balance is the same and the Warrior is just 1 gram heavier. So there is certainly not too much difference in those specifications. The two big differences are the string pattern and the addition of the Textreme. I really found the Textreme Pro Warrior to have a really solid feel, free of vibration. It was very comfortable to hit the ball with. That is something that is important to me. I like the racquet to have a very stable feel, even as much as possible on miss hits. The Prince Textreme Pro Warrior 600 was terrific in that regard. I had noticed an improvement right away from the Pro Beast.

As mentioned the weight and balance are right around what I like. I had been playing with the Pro Beast 750 before switching to the new Textreme Pro Warrior 600 and the balance is listed as the same and the weight is only 1 gram different, with the Warrior being heavier. I think there is a little more to the weight and balance of the racquet then just the 1-gram difference though. I think it comes down to the stringing pattern. The Beast is a 14 x 15 string pattern, the Warrior a 16 x 17 pattern. As the measurements from Prince are for the unstrung weight the denser string pattern adds a bit more weight to the racquet than the 14 x 15 pattern does. In particular it adds that bit of extra weight in the head of the racquet

The weight and balance of the racquet are a really good combination. The racquet is light at 129 grams and with its 353 mm balance it is pretty evenly balanced. Being light and fairly evenly balanced it is quick to play which I like. I do like to take the ball before it gets to the ball as much as I can so I end up taking a lot of balls on the volley. I found the Pro Warrior 600 to be pretty quick to get back and through to the ball. Not quite as quick as the Beast but not a huge difference. I found it faster to get back and through to the ball than the Airstick 130 which makes sense as it is a just a bit lighter and its balance is less towards the head. I found the Warrior to be quite good for hitting straight length shots as well. I found there to be more overall accuracy with it compared to the Pro Beast which I was playing with most recently. From an accuracy standpoint it was more or less the same as the Airstick 130 which makes sense as it so close in weight and has the same head size and stringing pattern.

The new Prince Textreme Pro Warrior 600 Squash Racquet is a very exciting new addition to Prince’s squash racquet line-up. It is ideal for those that like the Airstick 130 but were looking for something just a bit lighter and with a bit more of an even balance. It is also ideal for those that like the Pro Beast 750 but were looking for more accuracy due to its denser string pattern. It has a really nice solid feel on contact and is well suited for those that like to volley but still have a racquet with enough mass to have an effective length game. I believe the difference in feel on contact is due to the addition of Prince's Textreme technology.  The Pro Warrior 600 is a real winner. This is also the racquet that Ramy Ashour is supposed to be playing with this coming squash season. He did look to be using earlier in the year.

Update 11/19/2017. Please note that for this season the Prince Textreme Pro Warrior has been updated to be slightly lighter but balanced a bit more towards the head. Manufacturing was also moved to a new factory in an effort to improve durability. To check out the new version click on the "View in store" button below.