An Unorthodox Way to Stay Balanced

This blog topic is a little more niche than usual.

It's often assumed that if you're off balance it's because your core isn't strong enough or you haven't practiced your lunges enough, however, in a fast-paced match situation, it's definitely not this black and white.

Sometimes, alternative methods need to be used in more drastic situations to ensure you stay balanced. I've developed a few throughout my time playing squash, one of which has helped my game massively, however I've never really thought about it until recently...

Anyway, in this article, I'm going to delve into this unorthodox method I use to stay balanced during awkward movements and big lunges...

I've actually never really thought about this until recently. I noticed a bruise on the palm of my left hand, it was pretty sore and I couldn't figure out where it had come from.

A few days after this, I was playing a friendly match with a buddy of mine and I lunged deep into the front corner and placed my left hand on the floor to stay balanced. I shouted "OUCH" and that's when I realised how I'd hurt my hand in the first place.

I played a tournament the week prior and had some very tough matches, and I believe I must have slammed my hand on the ground a little too hard in one of those matches which gave me a bruise.

I always knew that this was something I did during squash but I'd never really given it much thought. I never practiced this in training when I was a junior, it just seems to have become part of my game without me realising.

Once I'd thought about it a bit, I realised that I do this quite often and after even more thought I decided that it was a good thing rather than a bad thing (even if I did end up bruising my hand).

Anyway, this is precisely the unorthodox method for staying balanced I wanted to go through. It basically involves using your non-racquet hand as much as possible.

In squash, not every movement is going to be as simple as just going to the ball and then back to the T. Sometimes you have to get around your opponent, sometimes the ball bounces at an awkward angle, sometimes you're not in the right position, and that's okay!

If you have a do a very big lunge into the front corner, it can be very hard to stay balanced during your shot and also then push all of that body weight and momentum off of one leg back towards the T.

By placing my left hand on the floor, I have an extra element of stability while I play my shot, meaning that it's got more chance of being accurate and I've got less chance of wobbling off balance.

Then, I can also use that left hand alongside whichever leg I lunged in on to push back up and towards the T.

I've never really acknowledged a professional player doing this while watching live squash as the game is far too fast to notice it, however, I did find an image of a player using this unorthodox method. Maybe it's not actually that unorthodox...

The image below of Mohamed El Shorbagy doing it is a perfect example (although I don't think I'm flexible enough to do a lunge like that in the first place)! 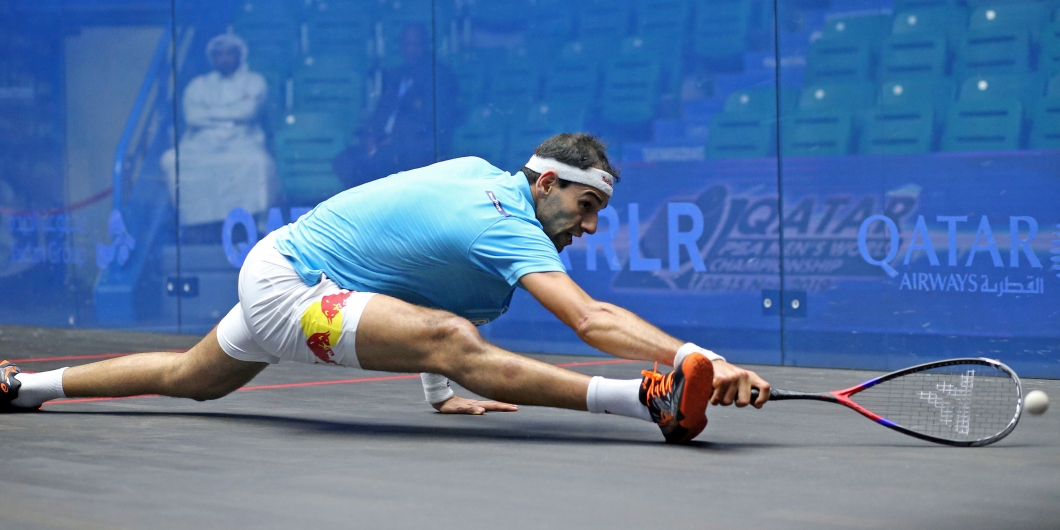 There are other situations in which your non-racquet hand can be a huge asset, and, in this instance, you'll be placing it on the wall instead of the floor.

This comes in handy in situations where you're under pressure from your opponent who, for example, just played a fast attacking boast while you're still at the back of the court in the opposite corner.

You have to move fast from one corner of the court to the other. If you're moving this fast towards a low ball, it can be almost impossible to lunge and a lot of players run in on both legs just to make sure they get to the ball before it bounces twice.

To keep yourself somewhat balanced (and to reduce the risk of you running into the wall with your shoulder), I'd advise putting your non-racquet hand on the wall whilst (or just after) you play your shot.

I've found that this helps keep me balanced and it also allows me to alter my momentum a little bit.

Rather than just sprinting full speed towards the wall and then pretty much having to stop in my tracks before running back to the T, I've found that I can lean into, and push off of, the side wall in a slightly different direction to help swerve my momentum back towards the T.

This is a huge help especially if you're really far into the corner.

It's quite hard to put it into words how, but this method does work on both sides of the court, one side is just a bit more tricky than the other. If your racquet hand is the one that's closest to the side wall then you can (in some instances) reach over your racquet hand to lean against the wall.

It'll feel quite awkward but if it keeps you balanced it might just be worth it!

Using the side wall is actually something I've seen current World No.1, Paul Coll, do in some high-pressure rallies. He's used the wall as something to lean on when he's doing an off-balance lunge and has then used it to push back off.

In situations like this, you need to use everything at your disposal to keep yourself in the rally. Since you've got a racquet in one hand and both legs will be moving, your non-racquet hand is seemingly the only other asset you have, why not use it?

I wish using your left hand for balance was something that could be easily trained or practiced, but unfortunately, I don't think it is (although I'd be glad to be proven wrong).

If you're interested in trying it out, I'd advise just going onto the court with your racquet and just doing some large, deep lunges (in which you'd usually be off-balance) and try putting your left hand down. Just see how it feels.

You could also try to think about doing it during friendlies, although this will take some real concentration to remember to do.

To finish off, I just want to mention that it's still important to have a good strong lunge and you can't rely solely on these unorthodox methods for staying balanced.

This advice mainly applies to very high-pressure scenarios during rallies where you don't have many options and you're just doing everything you can to get that ball back.

A kind of last resort, if you will.