I watched quite a few matches from the recent El Gouna International, which was again dominated by the Egyptian players.

Mohamed ElShorbagy and Nour El Sherbini won the men's and women's events and both of them put on absolute masterclasses. Fares Dessouky and Tarek Momen also put on some pretty strong performances.

It's no secret that Egyptian players are particularly strong when it comes to playing at a very fast pace. If any other countries are going to challenge the Egyptians any time soon, I believe practicing high-paced play is one of the keys to doing so...

I also believe that many amateur and lower-level players often neglect high-pace drills in their training. Many players just focus on the basics: drives, drops, boasts, serves etc.

I thought I'd  write up a blog post on a particular drill that I find to be incredibly beneficial for practicing at a fast pace...

Egpytian players are renowned for their incredibly fast pace of play. If you watch them play on TV, you'll notice that many of them stand very far up the T (sometimes even in front of the T) during rallies.

This is a very aggressive and attacking approach to play, but, it could also be the secret behind why Egyptians dominate the sport so much.

In fact, they're so well known for this style of play that the drill I'm going to be talking about is named after them, it's named 'Egyptian 3/4'.

Come to think of it, it's probably more of a conditioned game than a drill...

The rules are pretty simple, you can only play the ball only in the front 3/4 of the court. The ball is out if it bounces anywhere behind the back of the service box line (on the first bounce), or if it hits the back wall first.

Obviously, the serve isn't included in this condition, but, any shot after that has to bounce before the back line of the service box.

This game needs to be played with a training partner, or, you can do it as a three or a four, rotating with the loser of the rally switching with someone on the back door after every rally.

Points wise, you can play to whatever you want, I usually play a game or two up to 11 with a training partner.

It can get quite physically taxing, but rallies tend to be pretty short due to the fast pace created by the condition. 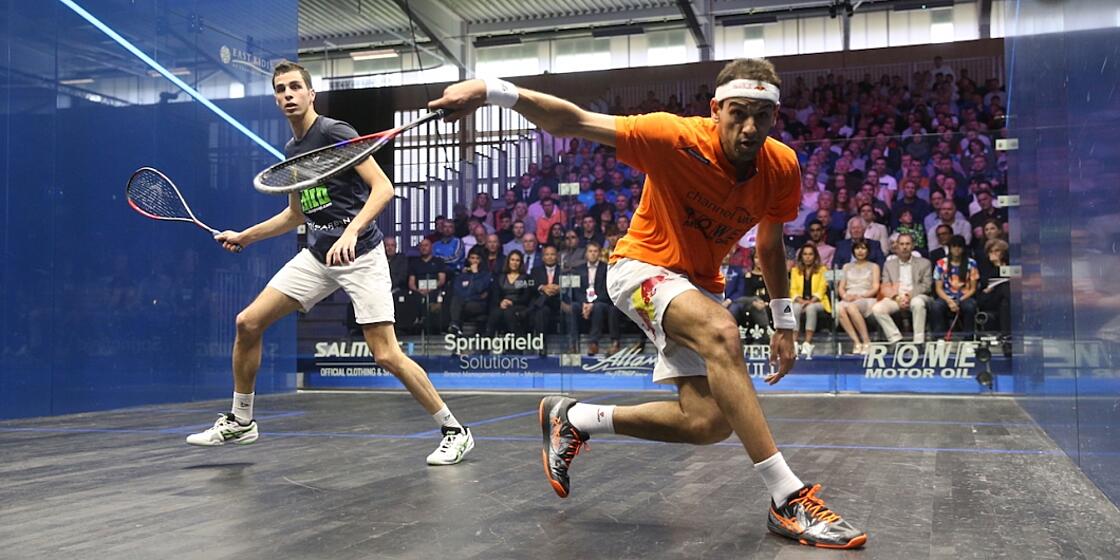 My advice for Egyptian 3/4 is to try to take the ball as early as possible and to be as aggressive as possible with your shots.

If you give your opponent even the slightest opportunity, they're going to take it, and you should do the same when you get an opportunity.

Chances are, most of your shots will be low down on the front wall, closer to the tin than the service line.

With that said, it's important to vary your length and pace.

Play some hard low drives to make your opponent scramble to get the ball, but, also mix in some softly cut drop shots and a few trickle boasts here and there.

If you find yourself on the defensive, you'll quickly realise how effective a high-paced style of play can be! You'll be scrambling to pick up every single shot your opponent plays and it can be so hard to tilt the tables back in your favour.

There is a lot of changing direction and deception involved with this conditioned game too. Cross courts are usually used to get out of trouble and a lot of holds and flicks are used at the front of the court.

This drill will help you to master those mid-court battles, it'll improve your reaction speed, and it'll also help you play more accurate winners, even when you're under pressure.

It really does help you work on the most important attacking aspects of squash, and this is what the Egyptian pros are renowned for.

If this drill is maybe a little hard for you at first, you can alter the condition to suit your standard. To make it a little easier, for example, another similar drill that helps you work on similar things is to play with the condition that the ball is not allowed to hit the back wall.

It's not quite as fast-paced as Egyptian 3/4 and the middle of the court isn't used as much, however, you'll still be using significant amounts of pace to try to hit the ball past your opponent, and, you'll still be taking things pretty early too.

If you're looking to progress Egyptian 3/4 even further, you could turn it into an Egyptian half-court game, which is even faster and even more attacking! A lot more drop shots are played in this variation.

Anyway, if you're looking to play like the top Egyptian pros like Gawad and Momen, this is a great drill to try out.