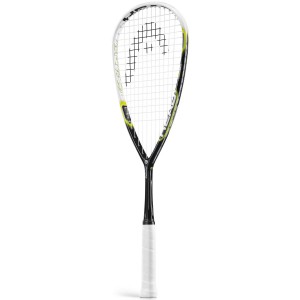 The last few weeks have been amazing here at Control the ‘T’ Sports. New squash gear has been rolling in our doors from many of our different suppliers. One of the orders I was most excited to receive was from HEAD. I have been very eager to try out the new Graphene series of racquets. The concept behind the racquets makes so much sense. The first racquet I decided to give a test hit was the Graphene Cyano 115.

So what is Graphene? On their tennis site HEAD states “Discovered in 2004, Graphene™ consists of a single two-dimensional layer of carbon atoms. This material has a breaking strength 200 times greater than steel, which makes it the ultimate substance for creating new HEAD tennis racquet frames with exceptional properties.” Simply put Graphene is incredibly strong. It is also very light.

So how does this help in the creation of a racquet? HEAD states “Through the use of Graphene™ in the shaft, the weight in the middle part of the racquet can be reduced. Instead, weight can be shifted to more functionally relevant areas in the grip and racquet head. This unique construction provides players with an unmatched maneuverability and an increased swing weight. In other words, a racquet with Graphene™ is easier to swing and enables even more powerful shots.” Graphene is so strong and light HEAD has been able to make a racquet that has much less weight through the shaft without sacrificing strength. With the overall weight of the racquet not being reduced the weight has been moved to the grip and the head of the racquet where it is more needed. Certainly having more weight in the head should help transfer power to the ball on impact. The logic behind the technology definitely seems sound!

So how did the HEAD Graphene Cyano 115 Squash Racquet play? I have to say it played great! The racquet I have been playing with most recently is the Black Knight Quicksilver nXS which has an even balance. Adjusting to the head heavy balance of the Cyano took a few hits but not too long. The Cyano 115 definitely delivers on its promise of power. Balls hit in sweet spot had a lot more power behind them then I was used to. If I hit the same height on the front wall as I normally would I had to slow down my swing to get good length. Not a bad problem at all! The racquet was definitely helping me to generate power.

The feel on contact was also really good. It had a very solid feel to it which I like. I brought an older Youtek Cyano 115 out for a comparison and the feel seemed a bit more solid on the new Graphene than the Youtek. When hitting with the Graphene Cyano 115 I did not notice much flex at all in the shaft of the head of the racquet when hitting. I was wondering how the shaft would perform given that HEAD had removed weight from it. It definitely felt more than strong enough. I think more of the weight of the racquet being in the head contributed to the solid feel on contact.

Overall I really like hitting with the racquet. It is very light weight at 115 grams but the balance being head heavy definitely helps it in the power department. I found it to be easy to maneuverable which is in large part due its overall light weight. That made it good to volley with. Lots of power and good on the volley make this is an excellent choice for the player that likes the latest in technology and likes a light weight racquet.

To view the racquet in on our store click on the “View in store” link below!