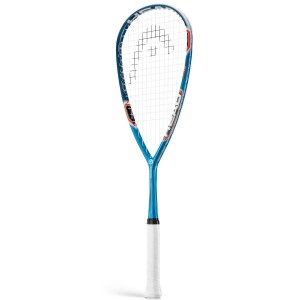 The importance of the racquets ability to produce power was magnified as I was left taking 60-70% powered strokes on the backhand protecting a tender outer elbow.  It was very reassuring knowing that the ball would find its way to the backcourt without needing to generate significant racquet-head speed that would stress an already inflamed elbow.

Truthfully speaking, there are what we’ll call “holes” in my game which really need to be patched if I’m going to have any success on the court.  While I am in fairly good physical condition (aside from the elbow thing) and quite quick on my feet, control issues have in the past obstructed my success on the court.  Understanding this I have a particular requirement of racquets in that they provide a great deal of control.  Getting an idea of the control this racquet had to offer I figured would be very easy to gauge in this particular hit.  My opponent on this day was not only a veteran player who could easily put away loose shots, but this player also happened to be a volley machine who was comfortable attacking rails only a few inches away from the side wall. For a racquet with a relatively open string pattern(12/17), I was pleasantly surprised with how well it performed from a control standpoint.  In particular, I found control pretty easy to come by from the backcourt.  The Cyano 135 made it extremely easy to keep rail shots tight to the wall while offering the power needed to hammer the ball back into the deep court with ease.  When I was put under pressure tight in the back corners, hitting a tight defensive rail by choking up on the racquet was extremely manageable.  This shot has become one of my “go to” defensive shots in my game and in the past when trying new racquets for the first time, I would often leave my opponent juicy put away opportunities from the T.  The racquet was fluid and smooth coming through on cross-court shots when the opportunity presented itself.  In the cases where cross court width was not perfect, I found that the pace on ball was more than sufficient in getting the ball past or handcuffing my opponent on shots which were too wide or not wide enough respectively.

Adding to the playability to this racquet, the open string pattern made generating cut on the ball quite easy.   When presented with a loose ball with my opponent in the deep court, hitting a winner into the front court nick was very manageable.  In addition, I noticed that the cut produced on drives was very nicely causing the ball to die in the back corners.

This racquet proved to be very well suited toward my game and was easily the preferred racquet of the four I have demoed in the past few weeks. All the racquets were surely top quality however, I found the Cyano 135 contained the unique combination of power and control which served as a nice cover-up for some of the weaker aspects of my game.  To add to this the headlight balance of the racquet made attacking volleys a breeze when the opportunity presented itself.

What turned out to be a very welcome coincidence with this racquet was its rigidity and stiffness profile.  Over the course of the match I did not find the frame to be overly flexible when making contact with the ball.  The Graphene technology incorporated into the design offers a light weight frame with excellent structural strength.  I imagine with an elbow in the shape that mine was at the time; any added load on the elbow via a flexible frame surely would have translated into discomfort around the joint.  The open string pattern may have played a role in reducing elbow strain by dampening off center hits without compromise in control through the relatively stiff frame.

The Cyano 135 has left me with the impression of a racquet which is well suited for a player who relies on the racquet to generate quite a bit of power on each stroke.  For a player who likes to attack the ball with volleys pushing a fast paced game, this racquet surely could be an option seeing as it is quite easily maneuvered and packs quite a punch.  I believe it is safe to say that the Head Graphene Cyano 135 can be summarized as a maneuverable yet powerful racquet suitable for players looking for any advantage they can get with regard to on court control.