How to Hit a 100mph Squash Shot

I was reading a thread on Twitter recently which discussed some really interesting points regarding power in squash. The people in the thread were debating whether or not you have to have big, strong arms to hit the ball hard in squash. Most people were in agreement that you don't, however, I've spoken to a lot of beginner level players who assume that you have to be super strong to hit a powerful shot.

Swing technique, balance, stability, and movement all play a part in a player's ability to hit the ball hard. This got me thinking about power more broadly. Since power is an area of my game that I'm trying to improve, I thought it would be interesting to delve into some of the key ways to hit the ball with more power. 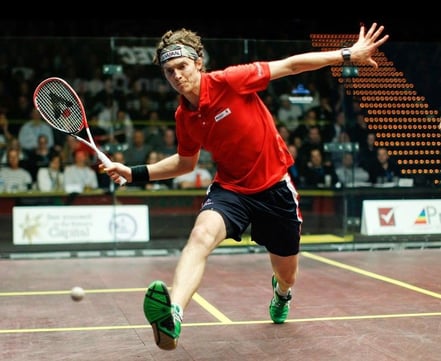 The image above is of Australian professional, Cameron Pilley. Cameron Pilley can hit a squash ball harder and faster than anyone in the world, he set an official world record after hitting a 176 mph shot (in 2014 I believe).

If you take a look at the picture, you'll notice he isn't necessarily a huge muscular person, yet, a combination of skills, such as his incredible technique and powerful movement, have allow him to hit the ball with unbelievable power.

I myself am not a particularly powerful player, however, since I've got 13 years of experience under my belt, I've still got the capability to hit the ball pretty hard. The problem was that I could rarely do it accurately.

I neglected the use of power in my game for some time, however, a while back I decided that it's something that I could really benefit from improving. I've been incorporating power into my training regime for some time now, this has given me a much deeper perspective into how to actually hit the ball hard and how to do it accurately.

There are a combination of factors involved if you're aiming to hit the ball hard. Let's start with the biggest one (in my opinion), swing technique...

Everybody has a different style of swing that they've adapted over their time playing squash. When it comes to tailoring your technique to hitting the ball with power, unfortunately, there's no 'perfect swing'. Everybody will benefit from slightly different adjustments to their own swing, and more often than not, this is a trial and error kind of process.

If you practice just hitting straight drives repeatedly with a 100% focus on increasing your pace, you will see an improvement, it just might take some time. If you're looking for more specific areas of your swing technique to focus on to access more power, some common elements you could think about might be:

Ideally, a good solid swing will look clean and controlled. If you're struggling for ways to alter your technique to access some more power, you could always try filming your own swing, then watching a professional player hitting the ball hard, and make some of your own comparisons!

A lot of players struggle with their balance and stability when trying to hit the ball hard. Putting that much force behind the ball can knock you off balance very easily. Strength actually does come into this, but I'm not talking about strength in your arms, I'm talking about core strength.

Core strength incorporates underlying muscles of the torso which help to stabilise your body, including your posture. If you've got a strong core, you'll be able to keep the rest of your body super still when you hit the ball. This gives you a much better chance at hitting your shot exactly where you want it to go.

Leg strength also comes into your balance and stability for pretty obvious reasons, if you're lunging in to a shot and your legs aren't strong enough, they'll shake and move while you're trying to swing. This can lead to hitting loose shots and can also put you in a poor position for your next shot.

If you're looking to improve either your core strength or leg strength, there are absolutely loads of squash related fitness videos you could watch. Nick Matthew has some great ones on his YouTube channel and SquashSkills also produce a lot of squash based fitness content.

You could also do some ghosting practice and really emphasise keeping your body still and solid while you swing. As long as you make sure to focus your thoughts on keeping balanced and stable, you'll see improvement. Just make sure you're not just 'going through the motions'! 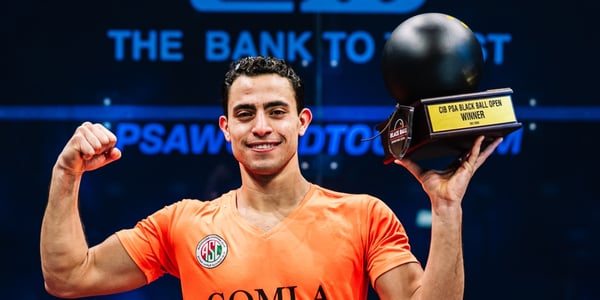 Fares Dessouky (pictured above) is another of the hardest hitters in on the PSA tour. You can see that Dessouky is more muscular than Cam Pilley, however, Pilley could still hit it harder. Obviously, being an esteemed professional player, Fares has an incredibly good technique to contribute to his hard hitting abilities.

I guess the point that can be made is that you don't NEED to be big and muscular to hit the ball hard, however, it can still help if you are!

Moving on from stability, your body position is vital when hitting the ball with power. Ideally, your body will look strong and sturdy when you come to strike the ball. Make sure your not hunched over the ball, your back is straight, and your shoulders are squared, then you're good to go!

If you're body and shoulders are hunched over it can inhibit your arm's ability to perform a full swing through the ball. This can make it very difficult to hit the ball powerfully and can also effect the cleanness of your swing, not to mention the added risk of injury.

Leaning in to the shot is also crucial, when you lunge in you must make sure you're body isn't upright or leaning back as this can seriously put you off balance. This wastes a lot of the energy you put into your movement to the ball and your lunge in.

If you use the momentum from your movement and from your lunge to lean into the shot, all of that energy and power will be transferred into your shot. Equally, using your follow-through to then pull your movement back towards the 'T' is a great way to maximise efficiency and not lose energy in the process.

Hitting with power can be an effective way to gain the upper hand in a squash match, it keeps the pressure on your opponent, it'll help keep you on the 'T', and it'll ultimately help you win rallies.

By no means am I a master of hitting with power now, however, I've noticed significant changes to my game as a result of practicing it and it's definitely given me bit more of an edge over my rivals!