Investigating The Backhand 'Tip Over'

When I watch professional squash I don't usually dissect players' swings and techniques in too much detail because I'm immersed in the game, but, after watching Mazen Hesham play a few times, there's an element of his backhand swing that simply can't be ignored.

On the very few occasions I see this element of swing mentioned online, it seems to be referred to as the 'tip over'.

Hesham's backhand is an extreme example of the tip over, but after I'd acknowledged it in his swing I started to notice it (a little more subtly) in a number of other players' swings, but there are also a number of players who's backhand doesn't have the tip over.

In this article, I'll dive into this interesting swing element its possible benefits and drawbacks, and whether or not it could be beneficial to try implementing into your game.

So, what actually is the tip over? Basically, if you picture a backhand swing, the tip over occurs at the highest point of the backswing.

To execute the tip over, you'd essentially roll your wrist to tip the racquet a little further over than you would in a standard backhand just before you swing through the ball.

I've definitely butchered that explanation but luckily I found a screen grab of Mazen Hesham's swing that perfectly illustrates what an extreme version of the tip over looks like (seen below). 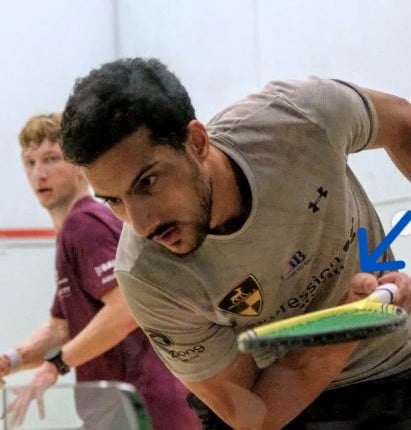 Again, I will stress that Hesham's tip over is a very extreme example, however, I've noticed a large number of other players utilise a more subtle tip over on their backhand too including Nouran Gohar, Saurav Ghosal, Mostafa Asal, and Marwan Elshorbagy.

Marwan actually seems to have changed his swing to incorporate the tip over quite recently as, after looking at some of his older games, he didn't seem to have it.

There's an excellent slow-motion clip from Squash Skills of a player playing a backhand drop and his swing features a very clear tip over, check it out by clicking here (make sure to come back to this article after)!

Anyway, the fact that pros are using this technique must mean that there is some benefit to the tip over, but the question is, what are those benefits?

Well, funnily enough, when I was a junior, my coach actually encouraged me to use a similar technique to the tip over in my swing (but it was to a similar degree that Hesham uses it).

My coach believed that it would help me access more power as it would allow me to use that extra bit of wrist to whip through the ball faster, and I do think there is some truth to that.

When coaching, I've noticed that a lot of younger junior players seem to develop a tip over naturally which could be in order to access more power, as it can be very tough for juniors to hit hard before their muscles have developed.

So I guess that power could be marked as a potential benefit to the tip over, but, when it comes to the pros, I don't think that they utilize the tip over to access power.

Thanks to extensive strength and conditioning training combined with years of technical practice, most professionals don't struggle to access power from a more 'standard' technique.

For the pros, I think it's a little more about deception and the extra power could be classed as a bonus.

Again, looking to Mazen Hesham as an example, he's one of the most creative and deceptive players in the world and I think his extreme tip over on the backhand side makes it almost impossible to predict what shot he's going to play next.

I do think that the tip over can really add an extra element of surprise to players on the backhand side as it makes the swing that little bit harder to read, although I wouldn't say that it is essential for all players.

Before his retirement, squash legend Ramy Ashour was known for his unique backhand technique that didn't feature a tip over and he is one of the most deceptive and creative players in the history of squash.

In fact, there are also a lot of incredibly successful current pros who don't seem to utilize the tip over, the most notable being Ali Farag who is arguably one of the best players of the current generation.

Maybe the tip over is something that benefits certain styles of players over others?

The final benefit that I think should be mentioned is that the tip over also gives access to a good degree of cut or slice on the ball which can be used to play the ball fast into the front corner and also keep them clinging to the side wall on lengths to the back (due to the added spin).

I know that my own swing has a slight tip over now (one that is far less extreme than what my coach used to teach me) and I find that it really helps me cut balls in short with accuracy.

I recently tried comparing using a tip over versus not using a tip over when doing some solo practice this week and I really struggled to hit balls accurately without the tip over, but that's just me.

Plenty of people I play with are just as good (if not better) at taking the ball in short and they don't use the tip over. This indicates that whether or not a player would benefit from the tip over is exclusively dependent on that player's individual style.

It seems as though the tip over shouldn't just be prescribed to every player as it may benefit some and hinder others. This was the conclusion I came to when I tried to think of some drawbacks/negatives to the tip over.

It seems as though it could affect accuracy for some players as it makes the swing a little more complex, but, for players like me who use a tip over, I find that it actually helps my accuracy.

I think that, until the tip over is investigated more in the world of squash, it can't really be defined as a good or bad thing overall, it just depends on the individual.

Something that I should note, having seen older footage of players like Jonathon Power, David Palmer, Rodney Martin, and Jansher Khan (who seem to have a tip over), I don't think that this is a new phenomenon, it's just under-discussed.

I think the tip over is something that needs to be talked about and investigated a little more in the squash world, as I don't hear it mentioned too often. I think I've learned a lot about it just from writing this article, but, if you have any thoughts on this technical element, please feel free to get in touch and let me know!