A recent incident between Mostafa Asal and Lucas Serme divided the world of squash with regards to who was at fault and what each player should have done in the situation.

The incident resulted in Lucas Serme getting hit pretty hard in the ear and suffering a minor concussion and a perforated eardrum.

I'll describe the scenario in a bit more detail later in this blog post, but, it also reminded me of a similar scenario in which Daryl Selby was struck in the eye during a match against Ollie Pett a couple of years back.

This got me thinking about whether or not squash is a safe sport in general and whether there are measures that can be taken to make the sport even safer, I decided that it would be a great topic for a blog post...

Now, first off, I'd like to note that this is a pretty subjective topic. I could compare squash to sports like rugby or boxing which could be deemed far less safe than squash (depending on how you define safe).

I'm going to try to keep this discussion solely focused on squash (without any comparisons to other sports).

Anyway, the first incident between Asal and Serme is quite tough to describe in writing, but luckily the PSA SquashTV posted a great video of Lee Drew and Joey Barrington explaining the incident alongside a clip of what happened (check it out by clicking here, but make sure to come back to the newsletter)!

Basically, Asal was 2-0 up and was on his way to winning 3-0 when Lucas hit a particularly wide crosscourt over to the back backhand corner, Asal seems to look at Lucas who was in the front right corner before going to the back to retrieve the shot.

The ball then bounces off of the side wall then the back wall right in the middle of the court, instead of moving far into the middle to play a backhand, Asal instead turns around to play a forehand directly towards Lucas who had (by then) moved back onto the T.

Lucas, who saw Asal shaping up to play the ball towards him, then kind of squats down and tries to cover his head, but unluckily, Asal's shot made direct contact with Serme's ear.

Lucas was unable to carry on and it was deemed that this was inflicted by Asal, therefore Lucas Serme won the match via default.

It's pretty clear that Asal didn't play this shot with any malice (as he was most likely on his way to winning the match anyway), however, it was still a very dangerous one to play.

Lucas has thankfully since Tweeted out that he's doing well and will be back on the court very soon (I don't believe any lasting damage was inflicted). I personally do feel bad for Asal in this situation too, as he obviously made a mistake and will now have that on his conscience that he inflicted this damage on a fellow player.

I'm sure he will have learned a lot from the whole ordeal.

He later Tweeted about the incident which can be seen below... 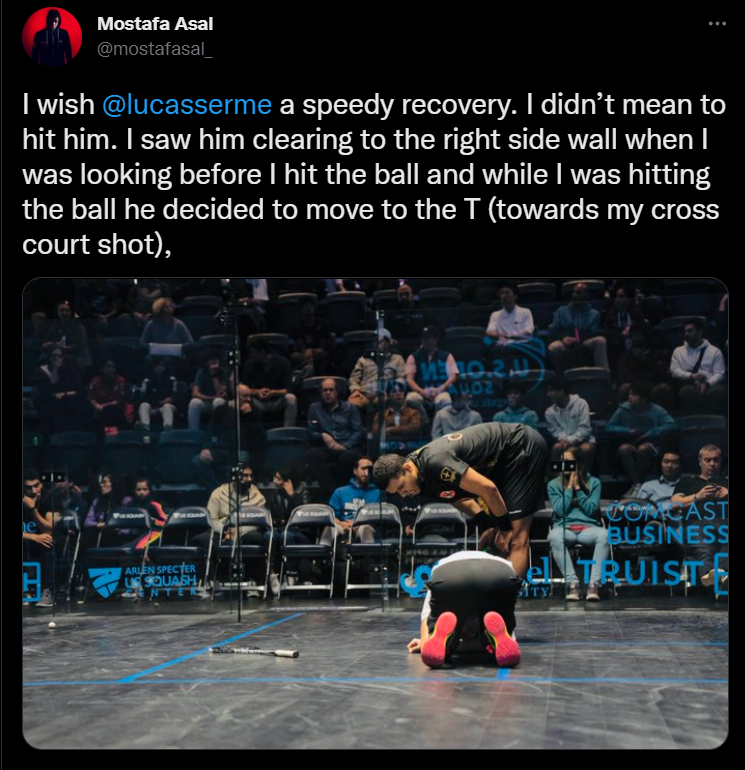 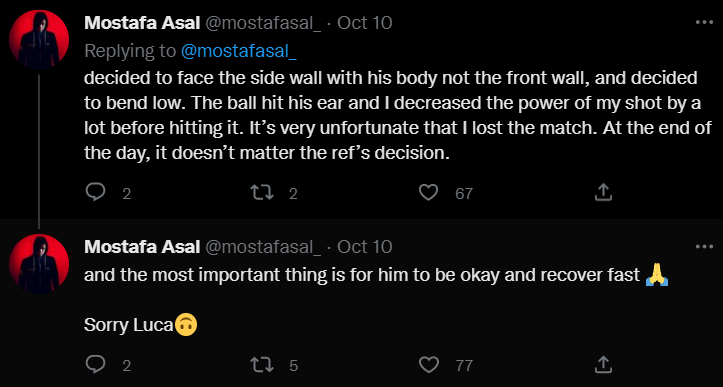 Similarly, the incident I mentioned in the intro between Daryl Selby and Ollie Pett involved Pett hitting a shot behind his back which ended up hitting Selby in the eye.

I couldn't find a clip of the incident but it sparked a big debate about the use of squash goggles and whether they should be made compulsory in professional squash.

Although this didn't result in any rule changes to the game, Selby opted to wear goggles from that point on whenever he played as he was clearly quite shaken up by the incident due to the fact he could have lost his sight.

Of course, if incidents like these are happening at the highest level of squash, there are also many more incidents that occur among beginners, intermediate players, to advanced-level players.

Opponent-inflicted injuries (such as the ones mentioned above) can definitely be mitigated to an extent, with the solution often being for players to always make sure to stop and ask for a let rather than playing a dangerous ball.

Contact is pretty common in squash due to the close-quarters nature of the game, so having good movement is a huge factor.

I know I've experienced my share of opponent-inflicted injuries, with one player who had a particularly wild backhand swing hitting me in the eye with his followthrough.

This could have been down to his crazy swing, but it could have also been down to me getting too close to him when he was playing his shot. I think it was a combination of both.

Since I was a junior at the time, I was luckily wearing protective eyewear which absorbed some of the damage, but my eye still swelled up a lot and closed throughout the rest of the game, I ended up playing with the use of only one eye for the second half of the match (I lost in case you were wondering).

I've also been hit with countless balls resulting mainly in bruises. I'd note that most of these incidents occurred when I was a junior, so perhaps this is a point of reference that we should get into the habit of encouraging safer play from the earliest levels of the game.

But the core question of is squash safe is still a tough one to answer. There are a ton of situations that can happen in the game that results in one or both players getting hurt.

I've mentioned opponent-inflicted injuries, however, the fast-paced, high-impact nature of the game makes it quite a minefield for receiving injuries that weren't dependent on your opponent as well.

Constant hard lunging and changes of direction certainly increase your chances of pulling a muscle or worse. Torn ACLs, damaged Achilles' heels, and sprained ankles are all somewhat common and quite hard to mitigate against.

Making sure you're properly warmed up and stretched before your match is the best way to reduce your risk of injury. Also, if something feels tight or sore, it's important to make sure not to push yourself too much and act based on your personal judgment and intuition.

I've seen plenty of players push themselves too hard or come back from an injury before it's properly healed, this usually results in the injury getting worse.

In full honesty, I would say that squash is on the riskier end of sports when it comes to injury due to all of the possible scenarios that can occur. The speed at which the sport is played means that fast decision-making is a big factor.

All of this makes squash sound pretty unsafe to play, however, from personal experience, I'd say that incidents are pretty few and far between.

I'd say you can be almost certain that you can trust any opponent you face to play in a safe and sensible manner as nobody wants to endure an injury or inflict an injury on someone else.

Often, incidents are purely up to chance, the best thing you can do is take necessary precautions wherever possible.

One obvious mitigating factor is wearing protective eyewear which more and more players seem to be doing. Of course, this is all down to personal preference as many other players argue that eyewear can steam up and restrict their vision even more.

Otherwise, just make sure to always ask if you're unsure where your opponent is and, if you're refereeing a match, make sure to warn players if they ever demonstrate unsafe play.

For personal injuries, make sure to know your own body and its limitations. Again, stretch and warm up thoroughly and know when it's time to stop if something doesn't feel right.

Overall, yes, I'd say that squash is safe. But there are always steps that can be taken to make it safer and I'd say the most important thing is to be aware of incidents that can occur so you can be ready to avoid them.

Bumps and bruises are common, but they're common in all sports, don't let this put you off the game!