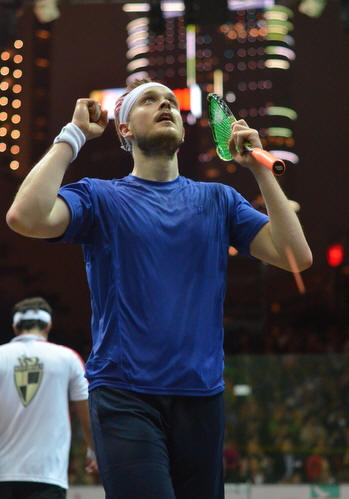 As I am writing this I am watching the final match of the Hong Kong Open 2011 and am quite amazed at the performance of James Willstrop.  The precision with which he plays is absolutely superb.

The first two games, in particular the second were very tightly contested.  James was so accurate with his shots though he really contained Darwish and gave him few good opportunities to attack.  Willstrop's length was terrific throughout the whole tournament.  When he went short he did a great job of keeping the ball tight to the side wall on the straight drops and angling it in to the side wall when volleying more from the centre of the court.

What was really interesting in both of Willstrop's last two matches was that the first two games were really hardly fought but he forced his opponents to work very hard and gave them so few opportunities to really attack.  The games were close in score but it was Willstrop who was controlling play.  At the end of the second game both Gaultier and then Darwish seemed to have been mentally broken and not able to mount much resistance in the 3rd game.

The performance against Gaultier in the semi's was really impressive partly because of how well James played but more importantly was the mental focus that he showed.  The last couple of matches against Gaultier Willstrop has lost and has looked very frustrated with Gaultier during the match.  Their last match, at the World Open Willstrop looked like he had carried over frustration from their previous match.  In the semi's of this tournament though he was incredibly focused and had put the frustration aside and definitely looked to be intent on getting revenge for the previous two defeats.

Congratulations to James Willstrop on such a dominating performance at the Hong Kong 2011 Open.  From the opening match to the championship match he never dropped a game and played brilliant, accurate squash.

James Willstrop is a Prince player and plays with the Prince EXO3 Rebel Squash Racquet.