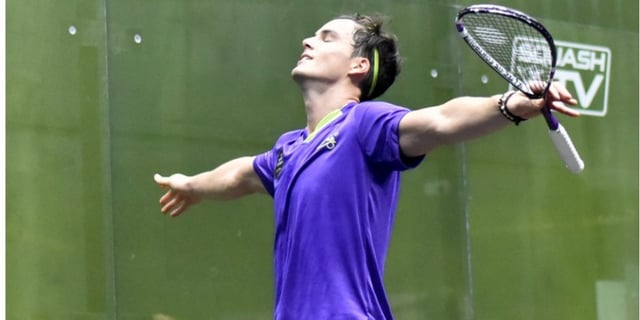 What a great tournament Paul Coll had at the 2016 Channel VAS Championship. He put on an amazing display of athleticism and squash. Coll earned his nickname previously in large part due to his flying dives he made to get seemingly unplayable balls back. What impressed me the most with his play this tournament was how in control of his body he was. There was no need to dive. His movement to and from the ball was incredible. His tactics were also excellent. He was defensive when he needed to be and attacked when appropriate. The quality of his squash was also very impressive. Paul Coll really showed what a quality squash player he is at the Channel VAS Championship.

In the times I have seen Paul Coll play before a lot of the highlight reel stuff was his incredible dives to retrieve balls that should have been down. The problem with diving is that it generally means you were out of position to be begin with and that you are out of position again after the dive. Coll showed absolutely dazzling retrieval skills again but he did so in a much more controlled manner. As Joey Barrington commented during the final of the event Coll was doing a great job waiting for the shot to be played rather than over anticipation/guessing. To be able to do that you need explosive power from the 'T'. Paul Coll definitely has that and he is really starting to use it to his advantage. Often I think players that are incredibly fit are defensive grinders or retrievers. Coll is one of the best in the world at that but he is also using his incredible strength of movement to dominate the 'T' and by getting on the ball extremely quickly from the 'T' to apply pressure to his opponent. The other aspect of his movement that I found really impressive is how stable he seemed to be even when really stretched out. I am sure that comes from having an incredibly strong pair of legs and core. It is very difficult to consistently hit quality shots when off balance. Coll's incredible strength allows him to be stable even when in very compromised positions.

While writing this I am watching the final of the Channel VAS Championship again on SquashTV and Coll's tactics have been spot on. He is playing to his strength which is his movement and stamina. More than that though he is doing a terrific job of knowing when to defend and when to attack. He has really figured out his positions on court from where he should attack and where he should be defensive. He was neither playing too defensively through this tournament nor trying to force the attack when it was not there. His choice of shot through out the final in particular was excellent.

I think the biggest surprise for me, and likely many others was the high quality of his actual play compared to the higher ranked players he was facing. It is all well and good to be a fitness machine and retrieve everything but to be able to win a tournament of this magnitude you have to play exceptional squash as well and Paul Coll did that. His quality of shot did a great job of minimizing Tarek Momen's chances to attack. He was not leaving many balls mid court on either the forehand or backhand which limited Momen's opportunities. In addition as Joey Barrington and Lee Drew noted in the commentary for the match he was extremely clinical with his finishing of points when the right opportunity presented itself. He was lethal on weak mid court balls when he forced one out of Momen.

Paul Coll is the 2015 Channel VAS Champion and deservedly so! He used his main, hard earned asset his physicality, excellent tactics and very high quality play to win the tournament. To come through a tournament that featured the likes of Mohamed ElShorbagy, Omar Mosaad, Miguel Angel Rodriguez, Marwan ElShorbagy, James Willstrop and Tarek Momen, is nearly unbelievable and certainly unexpected. Even more incredibly he had to play the qualifier to even get in to the main draw. Paul Coll might have been given the nickname Superman for his incredible flying dives but he really lived up to it with his super human achievement in winning the 2016 Channel VAS Championship!