I confess I did not believe I would be writing a post about Ramy Ashour winning the Grasshopper Cup when the tournament started. It has been a long time since I have seen Ramy Ashour play at that level for an entire match, let alone an entire tournament. 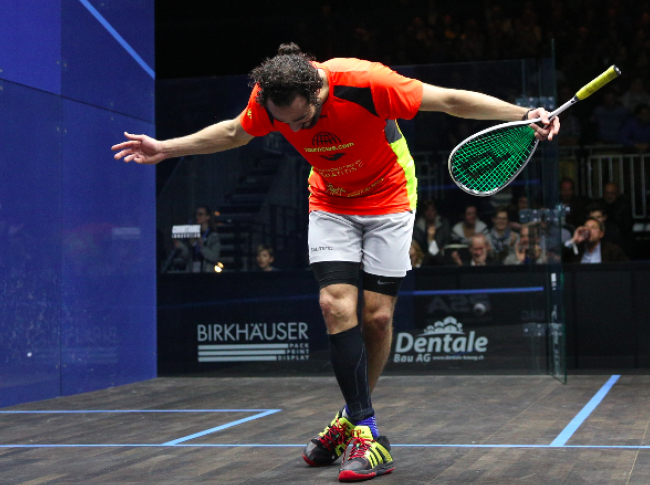 What an incredible display of squash we squash fans have just witnessed. When I started writing this I had just finished watching the final against Mohamed ElShorbagy and what a statement Ramy made. Ramy's length and width amazing, his use of deception was incredible, and his retrievals simply unbelievable.

Joey Barrington made note of a comment that Mohamed ElShorbagy had made before the match about how good Ramy's width and length is. I don't always think that is what people think about when they think of Ramy's play. His incredible shot making is what comes to mind when I think of Ramy's top game. That is all setup though by putting immense pressure on his opponents by such an incredible base game. Watching the match there were so few opportunities for ElShorbagy to attack from the centre of the court. Not only was Ramy getting the ball past Shorbagy a great deal of the time he was really forcing him to deep in to the back of the court. That good length and width really put a lot stress on Mohamed physically.

Ashour is also an incredibly deceptive player. He is capable of using such a short swing and still generating enough pace to get the ball past his opponent. That short swing really forces his opponent to play a high "T" position to be able to cover Ramy's incredible short game. That opens up the back court for Ramy and makes it so much harder for his opponent to cover the back court. It is all about the options he has from the same swing. There is also often a subtle delay in Ramy's shorter swing. That delay forces his opponent to have wait for the shot to be played making them that little bit later to the ball.

A healthy Ramy Ashour is possibly the best retriever on the PSA World Tour. While Ramy is certainly fast from point to point I believe it is his incredible read of the play that makes his such a good retriever.  He seems to be able to wait to just the right time to start moving to the correct location for where the ball is going. He does not seem to get fooled very often about where the shot is going to be played. His first step is also incredibly quick. So while there are probably players that are faster point to point, and others that are more powerful movers Ramy's read of the play and incredible reaction time make him incredibly difficult to break down.

What an incredible treat it was to get to watch a completely healthy Ramy Ashour play! It has been a long time since we have had the chance to see such a performance. Ramy's basic game, use of deception and incredible retrieving skill make his such a tough player to compete against. Add in his legendary shot making ability and Ramy is one of the best of all time. Congratulations to Ramy Ashour on winning the 2018 Grasshopper Cup and I truly hope that we get to see Ramy compete in many more events in full health in the near future! The PSA World Tour is always incredible but having a healthy Ramy Ashour competing for titles makes it even greater.