Squash Swings - The Old Vs The New

I had a chat with Control the 'T' Founder the other day and we got into a chat about squash swings and how they've changed over the years, and, how certain players have adapted to the newer, faster game by altering their swings.

Even while we were talking, I knew this was going to be a great topic for a blog post!

Before I start, I just want to mention that my personal definitions of old and new swings are completely subjective, I imagine a few people may disagree with me!

I'm a UK-based squash player and, when I was a junior, I was always taught to play with a large swing. I would prepare very early for every shot with a big backswing, I'd do a large sweeping motion through the swing, and end with a large follow-through too.

This was around 16 years ago.

At the time, I just thought every squash player in the world was taught this swing, however, when I began to watch professional squash more and more, I noticed very clear differences between the swings of players.

I also discovered that a large sweeping swing, just like mine, was often referred to as an 'English swing'. This intrigued me a lot, as I'd never really been shown any other way to swing up until then.

It was soon after this when I began to get one on one lessons from a much younger coach (I was around 14 or 15 and my coach was about 21). He introduced me to this new, more modern style of play.

Although this large swing was ingrained into my game, my new coach would teach me to use a much shorter swing, especially when volleying and hitting from the front of the court.

He often showed me clips of Egyptian players playing against English players and he made a note of comparing their swings. This was around the time when English players had begun to fall down the rankings and Egypt really began to completely dominate the PSA Tour.

Clearly, they were doing something new and it was working. 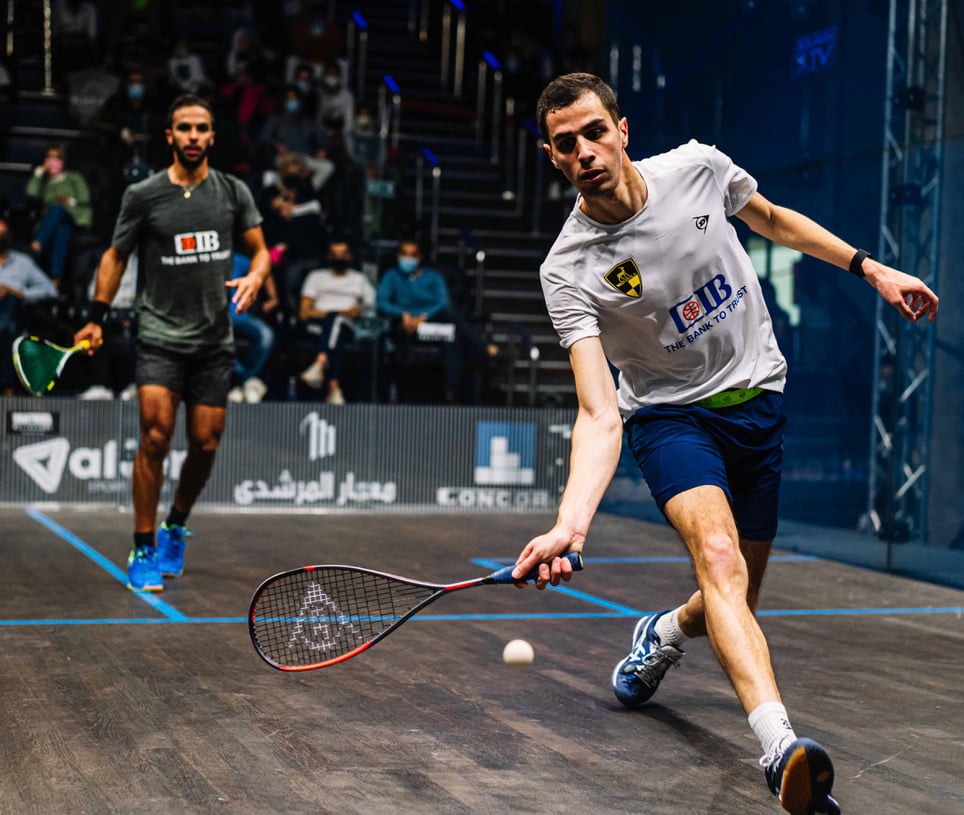 If you take a look at the two images above, in the top image, James Willstrop is coming into the front of the court with a huge backswing. Before I analyse this, I'd just like to note that I'm not saying that this is a bad technique. I used to be taught to go on with a large backswing because I was able to show that I could play any shot from that position.

However, if you take a look at the second (more up-to-date) image, Ali Farag is coming in with his wrist cocked and his racquet incredibly low. If you've ever watched Ali play, you'd know that he could also play literally any shot from this position too.

It's worth noting that the image of Willstrop is pretty old (although I'm unsure exactly when from), a lot has changed in squash over the years. The game has become much faster due to a number of reasons including a lower tin being introduced, lighter racquets being created, changes in scoring, etc...

I currently believe that the 'Egyptian' technique, seen from Farag, is the way forward when it comes to squash. A shorter swing allows you to react faster, switch the ball more deceptively, and even conserve some energy.

Also, the 'wristy' style comes hand in hand with the short swing. This is how you access a bit of power and flick to your shots from a lower backswing. Ali Farag uses his wrist with amazing dexterity when he plays, giving him so many options from almost any position.

Again, I'm not trying to knock Willstrops swing, as he has certainly perfected it over the years. He can play incredibly accurate drop shots from the back of the court, he's great at volleying, and just at the length game in general.

However, I think the new, fast-paced nature of the game agrees much more with the 'new' style of swing featuring a low, short backswing, and a lot of wrist.

But, this is definitely up for debate, if you have any opposing views please feel free to get in touch and drop us a message!