The 4 Keys to Effective Deception in Squash

Some pros have incredible deception, a few that come to mind are Ramy Ashour, Karim Abdel Gawad, and Daryl Selby. I spent a bit of time watching clips of PSA players using deception in slow motion to give myself a better idea of just how they do it so well.

I also like to try and throw deceptive shots into my own game regularly, so I'd like to think I've learned a few things about deception, so, I thought it would be a great topic to cover in a blog post...

A bit of deception in your game can go a very long way, your opponent will have to begin to fully cover every corner of the court and they won't be confident anticipating your shots which means their ability to attack is reduced. Deception can also hugely frustrate your opponent as well as tire them out... also it's always a crowd-pleaser.

I believe there are 4 key features of effective deception, movement & positioning, use of your wrist, shot selection, and timing. If you get all these right, your opponent will have no idea where the ball is going. However, if you get it wrong and your opponent sees through your deception, it can put you in a very vulnerable position... so be careful!

This is the biggest one for me. Your body position and movement to the ball can give away exactly what shot you're going to play. When moving into either of the front corners (after the other player has played a drop or a boast), my coach would always tell me to use my movement and positioning to show that I can play any shot.

Let's say your opponent plays a boast if you move too far round (in a curved motion) towards the ball and lunge in facing the side wall too much, you'll restrict the number of shots you can play to only straight. 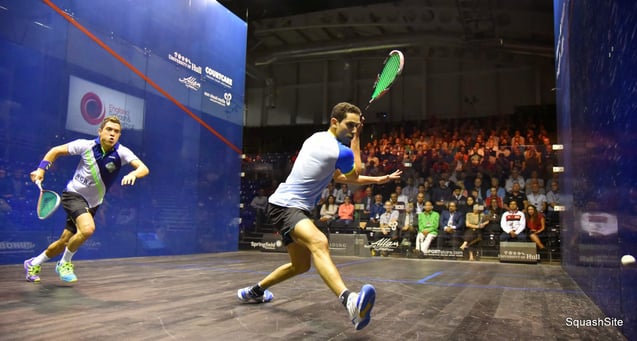 Alternatively, if you move too straight to the ball, you're only real option is to play it crosscourt. This is blindingly obvious to your opponent too, they'll see this as an opportunity to predict and attack your next shot.

How does deception come into this? Well, if you nail that movement and don't curve around too much, but also don't go too straight, you'll be able to show a huge range of shots that you're opponent will have to cover.

A bonus tip for this is to keep your head completely still no matter where you're playing the ball, don't move your head with your swing, this makes crosscourts particularly obvious. Although some showboating players like to look one way and hit it another...

Anyway, the 'positioning' element to this key also applies to your racquet positioning, if you get to the ball with your racquet low down and unprepared, you limit yourself to a front court shot (unless you've got a super-strong wrist).

Your opponent will also see this and start to move forward. If you move in with your racquet nice and high and prepared (I try to exaggerate this), then you show you can play any shot.

This one is a tough one to master, and to be fully honest, I wouldn't say it's absolutely essential, but it does give you a strong edge. Some of the best taxis you see in professional squash are from last-minute flicks crosscourt (either drop or length).

I find Ali Farag is incredibly good at the last-minute crosscourt drop. If his opponent plays a weak boast, Ali will get to the ball fast, show his racquet like he's going to play a straight drop shot, and then, when his opponent starts moving towards the ball, he'll flick it cross court at the very last moment.

It's important to remember that Ali is the world number 1 for a reason, he has perfected to art of the wristy flick. To do this as well as him will take a heck of a lot of practice.

However, the good news is that you don't have to do it as well as Ali for it to be a great shot! If you can convince your opponent that you're going to play it straight and then have the deception to flick it cross-court last minute, you'll come out on top.

I also find that using your wrist can be really effective in the back corners too, if you combine your positioning (from key 1) with a last-minute wristy crosscourt, your opponent could second guess the shot or head the wrong way, and they definitely will struggle to volley a deceptive crosscourt!

You can practice this on your own or with a partner, simple drills like crosscourt games or front-court games will do the trick. It does take some practice, so be patient. 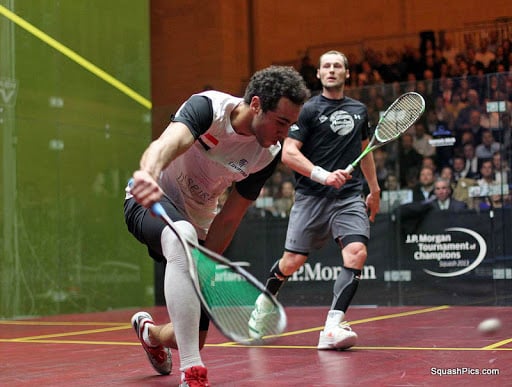 You've got to play the right shots. This shouldn't take too long to explain, but some players can get caught up in trying to put deception on every shot. There are a number of negatives to this, firstly, deceptive shots are difficult to hit accurately anyway, so you're risking weak shots if you're trying to be tricky all the time.

Secondly, it can distract you from your own game plan, remember, the basics are the most important elements to your game, don't neglect them! Finally, your opponent will start to read your game better and better, and then your deception won't work anymore.

Shot selection is vital for adding deception, lets say you keep showing a straight drop but playing a trickle boast, but you do it every time, your opponent will easily begin to read it.

One possible way to better the situation (mentioned above) would be to maybe play 2 or 3 trickle boasts with deception in a few consecutive rallies, and then when you see your opponent start to read them, you switch it up and play the straight drive.

It's crucial to get a good ratio and play a mix of shots when you're attacking with deception. Getting the ratio right is harder than it sounds, and if you get into the rut of just playing the same shot over and over, it can be hard to convince your mind and body to stop doing it in a high paced game situation.

It's quite difficult to explain this one, I'd say that it's most important to get on the ball as early as possible, just try your best to be aware of the bounce and the spin. If you can get on the ball early and give yourself as much time as possible, your opponent will still (hopefully) be getting back to the T. This means they'll be scrambling to get to the T while trying to read your shot, then they'll have to actually move to your shot.

However, I would also say it can be effective to use hold just as regularly. Still get to the ball as quick as possible, as this will make your opponent scramble to get into position, but then you can keep your backswing poised and just wait and wait and wait, then strike. This can knock your opponent off balance and really mess up their timing.

Overall, I'd say just try to have fun with it. Find out what works for you, what you're good at, and what you could work on. There are endless variations of deception you can use, and it puts a whole lot of fun into your training and matches too!