The Home Advantage In Squash

I know I talk a lot about the PSA World Tour on our blog, however, I'm aware that not all of you will keep up with professional squash (which is absolutely fine).

This topic should hopefully be relatable for players of all standards and I'll try to keep it focussed on that rather than the professionals, I'll just be referring to some professional scenarios every now and again to make my points!

Anyway, I recently watched an absolutely electric match in the (currently ongoing) US Open in which US World No 20, Sabrina Sobhy, overcame Egyptian World No.2, Hania El Hammamy 3 games to 1.

The crowd for this match was absolutely incredible in supporting Sobhy, their home player. It reminded me of France's Victor Crouin and his win in the final of the French Open against Marwan El Shorbagy, and the amazing crowd for that match.

In many sports, the home advantage can play a huge role in the results of matches and tournaments, but I'd never really considered it in squash that much until now...

Being the 'home player' can mean a couple of different things depending on the setting of your match.

It can mean the club you're playing at, for example, you could be playing a team match against another club at your home club on the courts that you regularly play on.

Or, it can mean the area you're playing in, for example, if you're in a tournament in your local town or county (which may not be at your home club, but it may be at a club you've played at once or twice in the past) and you're playing against someone from another city or even country who isn't from the area.

In both of the cases above, there are a number of advantages that the home player has, and all of these advantages can contribute a significant amount to the standard you play at and the result of your match.

The first thing that comes to mind (and the most exciting thing) is the crowd.

This depends on a few different things, however, if your local club is a busy one, you might have been lucky enough to experience a good-sized home crowd that's cheering for your team during a team match.

If this is the case and you've got a bunch of people cheering and rooting for you to win, it can provide an incredible boost of adrenaline and motivation to play well.

As mentioned in the intro, the match that inspired this topic was between US underdog Sabrina Sobhy and World No.2, Hania El Hammamy.

I was actually watching the match being played on the next court on SquashTV (whilst Sobhy's match was on a different live stream on a different court in the same venue).

The US crowd cheering for Sobhy was so lively and supportive that the cheers could be heard on the stream I was watching and the commentators I was listening to even begin talking about that match instead of the one I was watching at times.

Sobhy was playing out of her skin and I'm almost certain that the crowd's support played a huge role in the consistency of her play as well as her energy levels.

Similarly, Victor Crouin won the Open De France with the support of one of the best home crowds I've ever seen. Again, I believe they played a huge role in Crouin's result.

Another factor that the crowd brings to the table is that a lively home crowd can actually put a lot of pressure on the opposition too.

Just being in the 'away' environment can be very mentally tough for that player if there is a large crowd cheering for the opposing player. You can see this across all standards of squash.

In Sobhy and Hammamy's match, Hammamy was clearly not playing up to her usual standard, she seemed pretty tense and was making a lot more unforced errors than you'd usually seen her play.

In my personal opinion, the huge US crowd supporting Sobhy played a big role in this. It's almost like the atmosphere of the match is completely different for each player.

Although it's not necessarily tangible, the home player will get significant energy boosts from their supportive audience, whereas the away player may feel extra pressure and they may even feel as though they are playing against the crowd too.

I'd just like to note here that there is such a thing as bad audience etiquette. Every now and again, there are audiences that cheer when the away player makes mistakes or gets angry. You may have experienced this yourself, I know I have!

Bad audiences are definitely a thing and I'm not talking about (or condoning) this style of support, it's not good for the game and it's pretty disrespectful to the player. 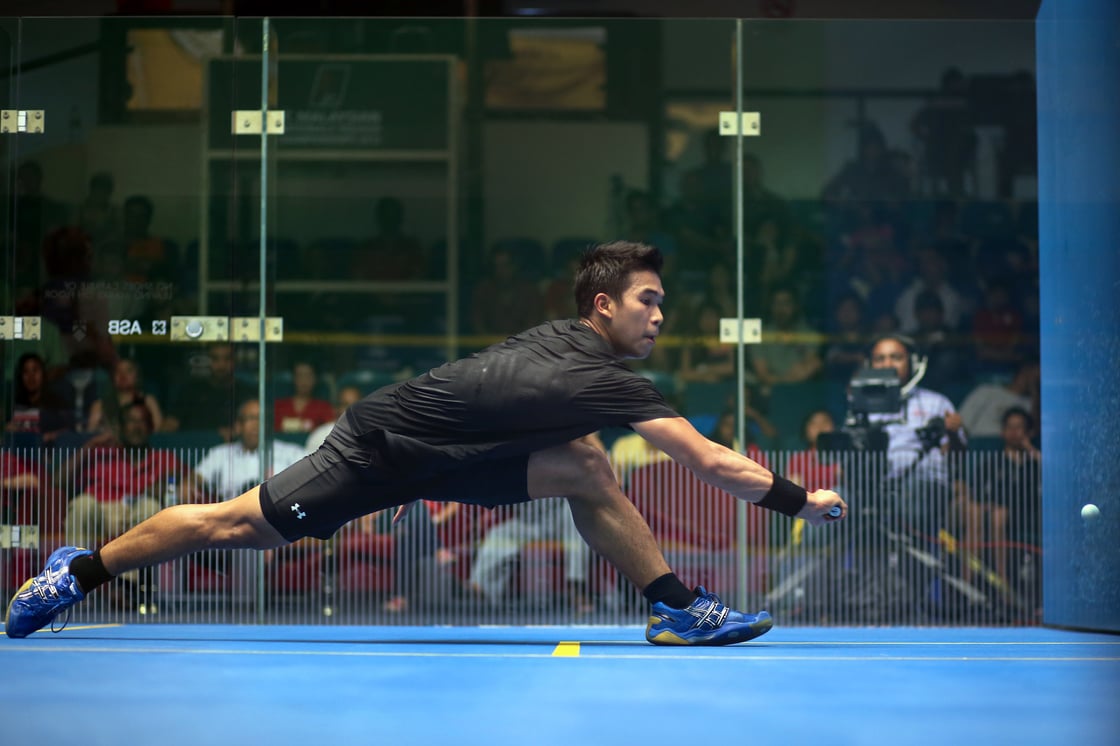 If you've played at a number of different clubs, you'll know just how large the differences between squash courts can be.

In my local league back in the UK, there are a couple of away matches that every other team in the league dreads playing.

One club has extremely cold courts that are very dead and the floor is not particularly springy. The other club's courts are extremely hot and the ball is incredibly lively, meaning that it's very hard to finish the rally with a winner to the front since the ball is so bouncy.

Both of these clubs require very different playing styles and strategies due to the way that they play. If I played a player on the cold, dead courts, I would have to take a completely different approach in comparison to if I was playing that same player on the hot, lively courts.

From the perspective of the home teams in those situations, they've spent years and years practicing and playing on those courts so they know exactly how to play on them and utilise the court conditions to their fullest advantage.

Even things like the lighting effect the overall feel of the court, and this too can have a huge impact on the results of matches.

I used these examples because they're quite extreme, however, even small differences between courts can provide big home advantages if the away player isn't used to that court. It can throw them off mentally and can make it tough for them to execute their strategy.

It was really interesting to delve into this topic in more depth as I'd never really thought about the home advantage this much before.

With that said, you can of course always prepare for it beforehand.

If you're playing an away game and you know that the club you're playing at usually draws a pretty big local crowd, it might be a good idea to mentally prepare for the fact that you won't be receiving as much support in between points as your opponents.

I'd also advise that you think about your game approach and strategy very carefully if you're aware that the courts at the away club play differently. If you've never played at the club before, I'd also recommend trying to get on court before your match and hitting some balls back to yourself to get used to the court a bit and formulate your plan.

If you can't do that, your last resort would be to use the pre-game warm-up to figure out how the court plays, unfortunately, that's the best you can do at this point, but every little helps.

If you're playing a home match yourself, it could be a good idea to make a conscious effort during your match to really draw that energy from your supporting crowd and absorb it into your gameplay. It can provide a great motivational boost which can win you some points!

You can also use the courts you're used to to your own advantage, if you know your home courts are very dead, try slowing your game down to focus on accuracy and getting the ball to die in the front and back corners.

If the courts lively, you may have to prepare for a longer more strenuous match and you could try to out pace your opponent, but I'll leave your tactics up to you.

The home advantage is a very real thing and it's definitely worth a thought if you've got an upcoming tournament or team match!