The Importance of Hitting with Height in Squash

I think every player knows and acknowledges that height is important in squash, but I believe that it's still severely under-appreciated by beginner, intermediate, and even some advanced level players. If you look at the very top squash players, they use height consistently and effectively for both attack and defense.

After watching a few players at my local club, I noticed that many players don't really think too much about the pace they hit the ball. Most players tend to enjoy just smacking the ball to the back of the court, which can be fun at times! However, it does seem like a lot of players believe that they have to use pace to get out of sticky situations, and equally, that you can't attack your opponent with height, in fact, the opposite is true for both these statements.

What is using height?

When you think of a great lob, you tend to think of professionals like Nick Matthew or Peter Nicol. Both players are absolute experts at hitting the perfect target so the ball can't be volleyed and dies at the back. When you see them use height against their opponent (especially from the front of the court, but, also from the back), it tends to be hit incredibly softly with a lot of slice so to make sure the ball dies.

If you're playing a taller opponent, it's a little more difficult to use height against them as they will have the ability to reach up and volley the ball. Targets wise, a good crosscourt lob from the front will hit high up on the front wall with enough width to bounce high on the side wall, and then die in the back corner without hitting the back wall first. As I'll explain in the next sections, height can used to attack as well as defend... 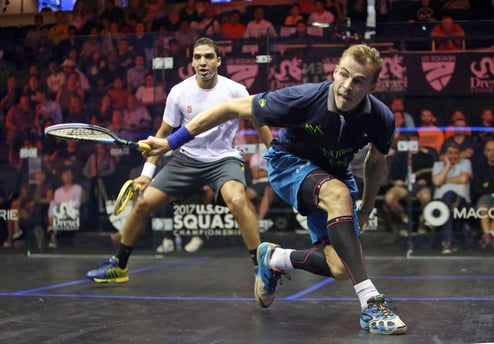 The most common reason why height is used is to get yourself out of trouble. If your opponent is dominating the T and making you run to all of the corners, height is a great way to give yourself a bit of extra time and get back into position. This is true for both the front and back of the court, lobbing from the front is a little easier to get the accuracy and height you need, lobbing from the back is a little more difficult as you have to add pace whilst making sure you get enough height and accuracy that the shot can't be volleyed.

Lobbing can be such a beneficial tool if you can hit it accurately enough, as mentioned above, it will give you plenty of time to get yourself back into position, it might even give you a bit of a breather, and, it could actually put you in the position to attack, or even better, win you the rally! Alternatively, it can be dangerous defending with height as if hit without accuracy, it'll give your opponent another chance to attack on the volley and you'll have minimal time to get back to the T.

This is the area I believe is neglected most in the world of amateur squash, however, the pros seem to be using height to attack more and more often in the modern game. Attacking with height isn't necessarily trying to hit winning shots with height, it's more using lobs whilst you're in control of the T to maintain this control, and ultimately force your opponent to play a weak shot which you can capitalise on and win the rally. If you're playing an opponent who loves the fast paced game and loves to volley, attacking with height is particularly effective as it slows down their entire rhythm.

It's important to note that attacking with height is an incredibly difficult thing to do, and shots must be played very accurately. Otherwise you can lose control of the rally pretty quick!

The lob serve, in particular to the recipients backhand is an excellent option against most players. Many beginner to intermediate players will struggle to hit with pace on a high backhand so you’re limiting your opponent’s options to attack. They will likely either push the ball deep giving you an excellent chance to try and volley or will take it short. If you watch for the drop you can be on it early to put them back under pressure.

Also, mixing in a lob serve regularly throughout the game adds variety and gives you a better chance to catch your opponent off guard with a power serve or body serve.

I would say that it's highly important to incorporate height into your triaining regime and practice using it from all corners of the court in all situations of a match... I certainly plan to!