It's common knowledge that mental strength is very important in squash, but that can mean a lot of things.

For some players, mental strength means being able to focus and stick to their game plan without losing focus, for other players, it could mean being able to hold in anger, stay calm, and reset in between rallies when they're not playing the way they'd like to, and for some, it might mean not letting nerves and pressure get the best of them.

If there's one player on the PSA Tour that demonstrates all of the above, it's Paul Coll. In his recent final against Ali Farag at the CIB Egyptian Open, I was unbelievably impressed by the way Coll handled things mentally, especially in the face of so many factors that were out of his control...

It doesn't matter too much if you didn't watch the match I mentioned above, I'll quickly sum it up for you...

Paul Coll faced Ali Farag in the final of the CIB Egyptian Open and lost 3-1 in what was a pretty great match.

But a bit of context first, in the semi-finals (held on the previous day), Farag faced Mostafa Asal in a very 'stop-start' match that didn't seem to be particularly physically tiring for Farag. He won 3-1 and was able to head back to his hotel to rest.

Following the second women's semi-final, Coll was up next against Diego Elias and they had a pretty brutal five-setter that Coll ended up taking 11-7 in the fifth.

I believe this match went on pretty late (possibly even into the early hours of the morning), meaning that Coll will have had a terrible rest and recovery in preparation for his final the following day. 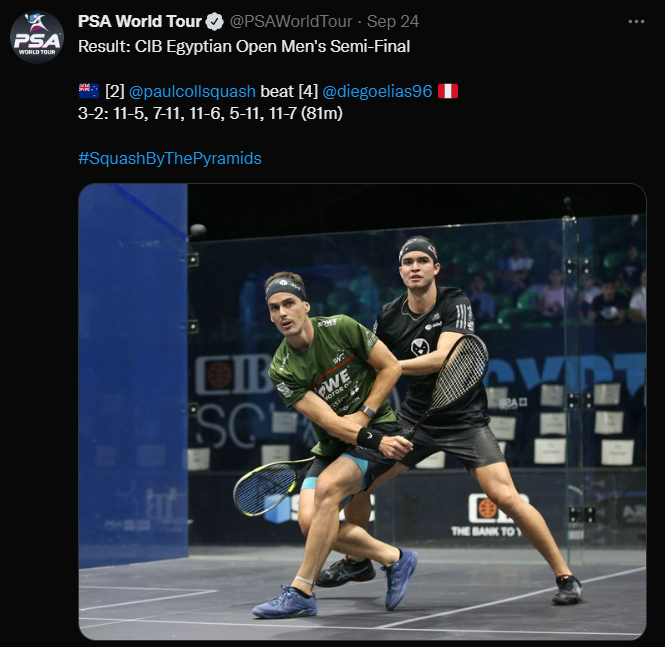 Fast-forward to the final itself, both players were slipping quite severely when lunging into the front backhand corner (although this seemed to mainly affect Coll), I believe this was due to dust or sand being on the court but I might be wrong.

Just a short disclaimer, I'm in no way discrediting Ali's win here as he played some absolutely incredible squash throughout the tournament and fully deserved the title, plus, he also had to deal with the same slippy-court issue as Coll.

For me, Coll's behaviour during and after this match really stood out and that's what I'd like to talk about.

The pressure was really on for this match. While the tournament was being played, Coll was ranked at World No.2 and Farag sat at World No.1, however, following the update to the rankings, the two have now switched with Coll back at World No.1.

This back-and-forth at the top spot has produced a great rivalry between these two players which is awesome to see. They're essentially both battling it out to be the best squash player on the planet.

This factor was further amplified by the fact that this tournament was being played in Ali's home country of Egypt and the crowd was very heavily in favour of Farag which can actually be a pretty big asset for a home player.

With this rivalry in mind, Coll did not appear to be nervous being against Farag, which is already a testament to his mental strength. I'd imagine that he was nervous on the inside, but he does a great job of not showing it and not letting it impact his performance or the execution of his game plan.

He stuck to his guns for pretty much the entire match against Farag, however, it seemed as though fatigue is ultimately what let him down in the end as it affected the accuracy of his shots, which is the whole premise of his game plan.

The game itself was really smooth (apart from the repeating issue of the slippery floor), Coll's game plan seemed to be to use his calculated and accurate approach to minimize Farag's opportunities to attack by repeatedly playing tight lengths down either side.

Farag responded by slowing his game down and lifting the ball into those back corners to restrict Coll's ability to return them with his tight lengths. This produced weaker lengths from Coll that Ali was able to capitalize on and win points.

Farag seemed pretty unstoppable for the rest of the match and was relentless in moving Coll around the court.

The constant slipping in that front corner was clearly affecting Coll's game, however, there's not really anything that could be done about this. Court cleaners came on regularly to dampen the area to try to make it grippy again but it didn't seem to work too well.

Considering this was a platinum final between the two best players in the world, it was quite disappointing to see them both have to deal with dangerous court conditions like this.

Although this pretty big distraction was clearly frustrating Coll after each time he slipped, he really appeared to reset his mind after each rally.

When I look to some players a little lower down the rankings, if something isn't going their way (whether it's a referee decision, a dodgy ball, or something else), they often throw away further points because they're mentally distracted. But not Coll, he was executing his strategy every single rally and giving absolutely nothing away for free.

Anyway, after losing the final rally, Coll showed a pretty rare burst of frustration and threw his racquet, but he then immediately turned to Ali to shake his hand and pat him on the chest to congratulate him on the win.

For me, this was a completely understandable reaction, and, it also showed how fast Coll was able to accept the defeat, show his opponent some real respect, and move on.

In his speech at the prize ceremony, he didn't complain once about the court conditions and didn't have any excuses for the loss. He said that he didn't think he played accurately enough for a long enough time to get the win and then commemorated Ali on his performance.

Paul was obviously visibly unhappy about his defeat (I mean, who would be), but judging from his social media after the match, Coll clearly has that world-class mentality of knowing what he did wrong, and knowing that the next step is to move on and work on it for next time. 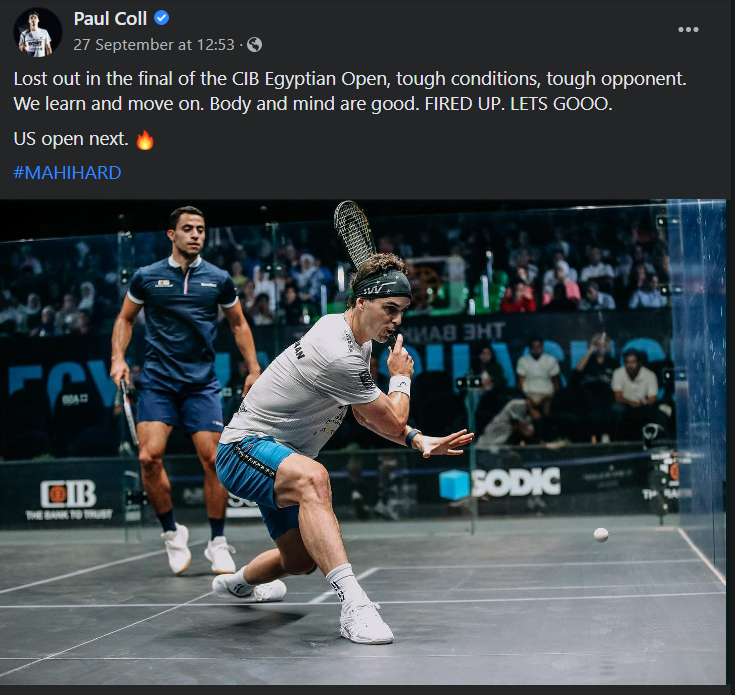 In my opinion, this is the attitude and mindset of a world-class athlete.

The words 'body and mind are good' really stand out to me and are a great thing to hear from Coll. He clearly knows the importance of that positive, forward-thinking mentality to be the best of the best.

Coll's calm on-court presence, strict composure, and humility in defeat is the result of years of dedication, practice, and experience in the sport.

Ultimately, his ability to move on and not let previous factors affect his current performance is second to none, whether it's losing a previous point, losing a previous match, or losing to this opponent in a previous tournament, Coll never seems to let anything get into his head.

Many players on the PSA World Tour, even those at the very top of the rankings, can have big fluctuations in their performance from tournament to tournament, however, Coll seems to just get on with it and has been on a constant upward trajectory with very few hiccups on the way.

It's absolutely awesome to see!