We all know the importance of practice. Repetition of any skill should in theory make you better at that skill. However, whether or not your practice is meaningful can have a huge impact on the speed and quality of your progression.

I was recently reading Matthew Syed's book 'Bounce', in which he notes that 10,000 hours of meaningful practice is needed to reach a masterful level of your chosen sport.

Although there is certain controversy surrounding Syed's argument, the underlying message for me was still the importance of meaningful practice as opposed to just going through the motions when training.

This 100% applies to squash, especially at a base level. Drives, drops, boasts, and all basic squash shots all need to be tailored to the best possible standard in order for players to be able to hold their own during a match.

The Importance of Meaningful Practice

Meaningful, focused practice is the best way to progress your core, baseline squash skills, so I thought it would be good to cover a few basic drills, what to focus on, and how to ultimately progress your game!

As mentioned above, the core shots are absolutely crucial to your game. In order to rally with almost any opponent, you need to be able to drive the ball to accurately and pin them in the back of the court repeatedly. This is how you then open up the opportunity to take it to the front and ultimately win rallies.

Practicing these shots in training isn't always enjoyable or engaging, and if you're not fully focused on what you're trying to improve you will see very little benefit to the training itself. In fact quite often, drills to practice your basic shots are used as a warm up, which is totally fine, however, if you're actively aiming to improve your core game, it takes a lot more than just going through the motions if you want to see any real progression.

I'll explain what I mean breaking it down drill by drill...

Ahh yes, the go-to warm up drill for players across the world. To the small minority of you that may not have tried this drill, it involves one player at the back playing a boast and one player at the front playing a straight drive (so the side each player is hitting on changes with every shot).

The potential benefits of this drill tend to be wasted in many ways, for example, most of the time the person boasting is thought of as the feeder, meaning they often don't put a huge amount of thought into their shot as long as it goes in.

First off, boasts are a crucial shot in squash, if you're forced into a tight position at the back, it's likely that you'll have no choice but to play a boast, and if that boast is poor quality you may very well lose the rally.

It's not actually very often you get to practice your boasts, and if you do it meaningfully you can get a strong edge over your opponent. What I mean by this is you should use this drill to focus on exactly what you want to improve on, for example, you could focus your mind and body on moving back to the T after each boast or you could aim for more accurate 3 wall or 2 wall boasts.

The same goes for the driver at the front, they should be focusing as much energy as possible on their goal, whether that's hitting a target at the back of the court, or practicing movement to make sure they clear the area  after hitting to reduce their risk of conceding a stroke. For this the front player could focus on energy transfer in movement and efficiency, body position, or even just power and speed.

There's nothing like a good ol' length game. Both players hitting the ball down the channel to the back on the forehand or backhand side. It goes without saying that you shouldn't spend too long on a basic straight length game as your mind will eventually lose focus and the benefits of this drill will lessen and lessen throughout... unless you add in a few changes!

Progression of drills is a great way to make it more engaging. Start with the basic element of just hitting a straight drive and aiming for a target (for which you can use anything from a spare racquet to a water bottle placed about a racquet's length behind the service box next to the wall) and consciously try to think about an area that you're trying to improve i.e. swing, movement, power, or accuracy.

Once you feel like you're improving in your chosen area, try adding in a new shot, for example the ability to play a drop shot to the front only on the volley. This extra element makes the drill more exciting and takes it one step closer to a competitive match situation.

The length game often leads to people hanging back and getting a little lazy, focusing on keeping a good T position and hunting for volleys is critical to remember. This trains you to look for the volley first and then move back if you need to let it pass.

It's easy to get complacent playing only lengths in both drills and real match situations, try to make sure to exert as much pressure on your opponent as possible by hunting the volley!

A personal favourite of mine, although I've been told I play far too many crosscourts...

This drill involves a player on each side hitting crosscourt lengths to the other, you can start off just trying to keep the rally going, but as you progress you can make it more competitive.

The key to a good crosscourt is to get the right width so it hits the side wall just at the point where it's difficult for your opponent to volley, the aim is to try to get it past them into the back corner. The crosscourt game usually turns into a bit of a fast-paced volley battle, making it great fun when you add in point scoring.

Again, full mental focus is essential, just smacking the ball aimlessly to the other half of the court will not improve your game! To progress the crosscourt game further you can also add in the front corners of the court so you can practice your crash nicks and winners. 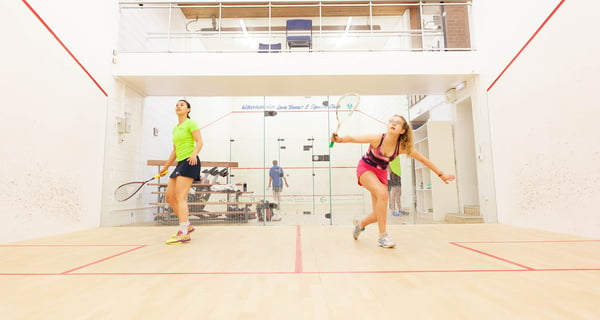 Each of these drills are great for practicing the basics, and what's even better is that they can all be modified and progressed by either adding in more shots, more conditions, and making them competitive by including points and even bonus points for hitting certain shots.

The purpose of doing drills is to incorporate and engrain motions, shots, and efficiency into your game, doing forces you to hit certain shots and those shots become more natural over time and will eventually find their way into your competitive game.