Using The Pre-Game Warm-Up To Your Advantage

There are a few things my coach taught me as a junior that have really stuck in my head throughout my years of playing squash, one of those things is to do with the pre-game warm-up.

He would always tell us that the warm-up provides players with the opportunity to gain an early advantage before the match has even begun.

Ever since then, I've always tried to use the warm-up as much as I could and I actually think this advice has helped me in a lot of games over the years. I thought it'd be a good idea to relay it over to you (the reader) in a blog post...

In a professional squash match, I believe players get two minutes on either side (forehand and backhand) to warm up their shots before the match begins. There are a number of different ways to use this to prepare yourself for the game and also potentially get an upper hand over your opponent.

Although two minutes doesn't sound long, when you're on the court I'd say it does feel quite long and it's important to use that time the best you can.

Recreational players like myself actually tend to get a bit longer to warm-up their shots. In regular league games, friendlies, and team matches, it's usually up to the players to decide when to switch sides, or, if there's a marker, they often don't actually time the warm-up.

As I mentioned in the introduction my coach had quite strong views on the warm-up. He would particularly hate it when players just smacked the ball back to themselves a few times with no real purpose and then just stared at the front wall while their opponent played their shots.

He'd regularly reinforce his views on warming up during group sessions and we actually did the odd drill which basically involved us practicing the warm-up. It seemed pretty boring at the time, but the more I think about it now, the more I realised that this was actually great advice.

Here are a few of his primary pieces of advice for using the warm-up to your advantage...

Warm-up ALL Of Your Shots With Purpose

Often, players tend to just hit a few medium pace straight drives back to themselves and then a medium pace crosscourt to their opponent. This defeats the whole purpose of warming up, to prepare your shots!

It's quite easy to fall into the trap of aimlessly hitting without realising and it definitely takes some focus to stop yourself from doing it.

You should take this time to prepare as many shots as possible. During the warm-up it's important to hit shots with different paces, throw a few lobs in there too, try out a few drops, a few volleys, a few volley drops, some boasts, even try out a few serves!

Basically, any shot that you might play in the match should be warmed up before the match actually begins. Make sure to play them with purpose too, try your best to make them accurate and hit those targets.

Otherwise, it'll take you much longer to get into the game. You'll be more likely to make mistakes and hit loose shots which could give your opponent the chance to capitalise early on in the match and take that vital first game.

Alternatively, if you've warmed all your shots up thoroughly, you might be able to have the upper hand over your opponent, get an early lead, and build some momentum that could carry you through the entire match! 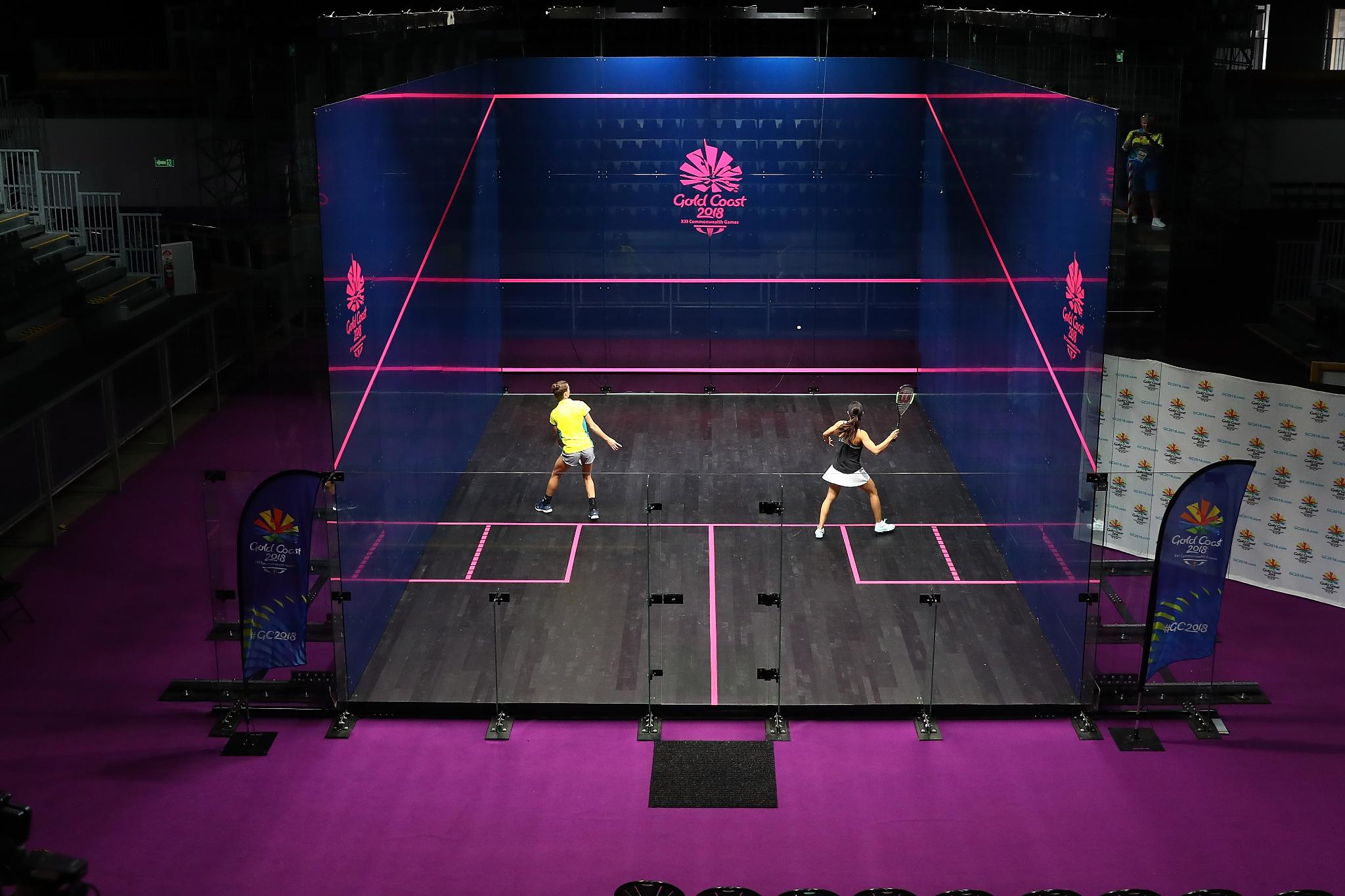 Rather than just staring at the front wall or daydreaming until the ball comes back to you during the warm-up, why not try watching your opponent.

You can tell an awful lot just by watching them hit the ball back to themselves, you can look for inconsistencies in their swing, flaws in their positioning, and you can also analyse their shot accuracy.

If they have a bit of a strange backhand technique and they're not hitting their lengths particularly tightly, perhaps this is a weak spot that you can target during the match.

Or alternatively, if they look like they're hitting very accurate straight forehand volley drops, maybe this is an area you should avoid playing the ball during the match.

You can really learn a ton about your opponent's game before you even start and this is particularly helpful when you come up against a completely new player who you've never faced before.

This kind of follows on from what I said in the point above, however, I wanted to delve a little deeper.

Especially if you're playing a completely new player, it's hard to know what to do against them until you're well into the match. If you don't have a coach or friend to help, developing a game plan can be really hard.

The warm-up can give you a leg up on this. If you've spotted a few weaknesses in their game while they warm up, you can incorporate them into your plan as areas to target regularly during the match.

If this is a player you've played a number of times before, you might already have quite a clear game plan in mind and you can use your time during the warm-up to solidify this plan in your head before the game starts.

Also, even if you know your opponent's game inside out, you should still try to look out for flaws in their game while they warm up. Perhaps their length isn't deep enough on this particular day, or maybe they're moving a little stiffly due to a recent injury or a tough match the day before.

You'd be surprised with how much you can notice if you look hard enough, so why not give it a go? Use that warm-up to your advantage!