What I Learned Training With A PSA Top 100 Ranked Player

As I often mention, I (Alex Robertson) live in England, and I'm incredibly lucky that the standard of squash in my local area is pretty good. Whether they're better than me, on a similar level to me, or of a lower level than me, it's always easy enough to find someone to play with.

I managed to get on court for a couple of hours with Richie (and another good friend of mine named Cai) the other day and it was quite the experience.

Here's what I learned...

First off, a bit of background on Richie Fallows, he joined the PSA World Tour in 2012 and has since won titles such as the Pilatus Cup, the Belfast Open, the PSA Toulouse, the Cleveland Skating Club Open, and the Rhiwbina Welsh Open.

These titles and a win ratio of 59.9% allowed him to reach the top 50 in the world on a few occasions.

Richie is 26 years old and is sponsored by Tecnifibre, his racquet of choice being the Tecnifibre Carboflex Airshaft 125.

His style can be described as fast-paced, tricky, and very attacking. Richie is great at using his tall build to move around the court with ease and his large swing to take space when he needs to.

As I mentioned, Richie recently moved to Newcastle and is still getting to know the players around here, so for the time being, he's stuck training with myself and Cai until he finds some 'more suitable' partners...

Needless to say, training with him was a pretty cool experience.

Richie is training for the upcoming British National Championships (beginning on Tuesday the 14th of June), so he's trying to get hits in whenever possible to sharpen up.

We started off warming up with a bit of boast drive (two players at the back, one player on the T hitting straight length) rotating every few minutes.

We then went into a drill in which two players would play a length rally down one side (let's say the forehand side) and the third player waits on the backhand side. The first bounce of every drive would have to be behind the T line.

We then progressed that drill and added in the straight drop. The drop can be played from anywhere including on the volley, from the back of the court, and off of the boast (as long as it was always a straight drop).

We had 7 lives each in these drills and you'd lose a life if you made a mistake or the other player won the rally against you.

After this, we played full-court rallies up to 11 each time with one player resting on the back door. 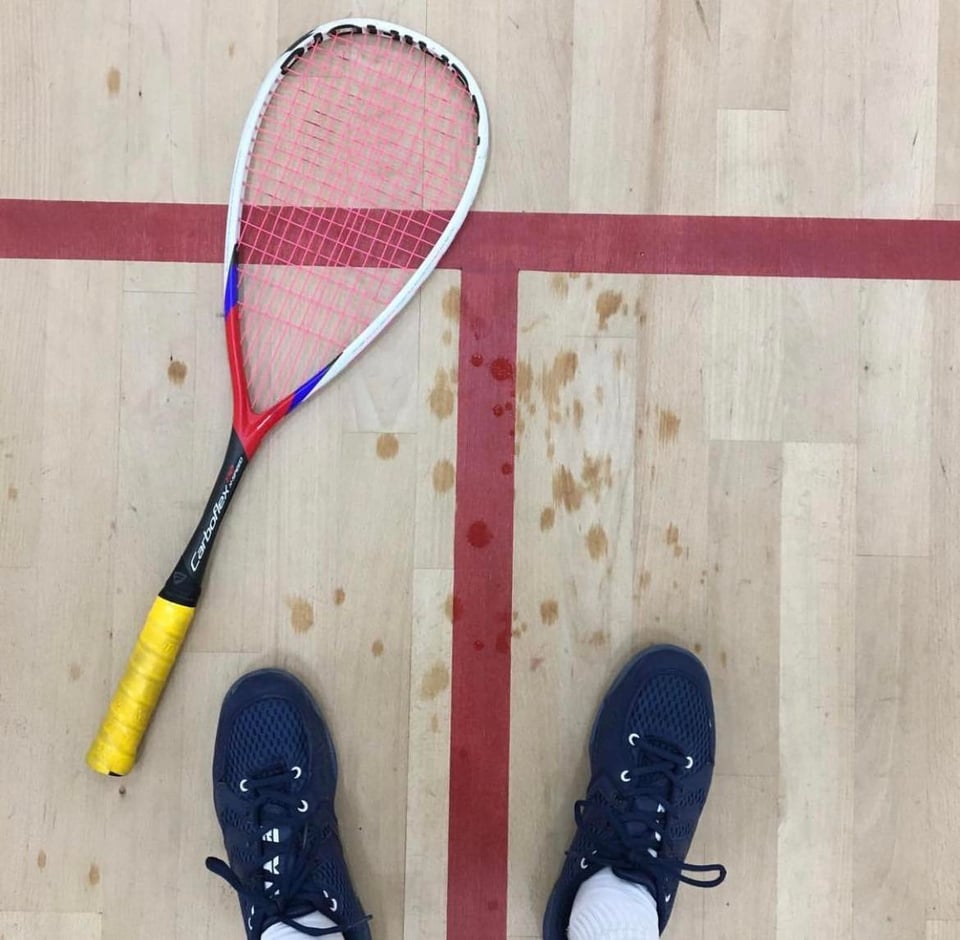 It's strange, whenever I watch the pros on Squash TV, they make it look so easy! I always like to think I'd be able to keep some sort of a rally going for a few shots at least with a pro.

I couldn't have been more wrong, experiencing it in real life is a completely different animal.

Any length I hit that wasn't tight to the wall and deep into the back corner was volleyed with pace by Richie.

He volleyed so many of my lengths which kept me under constant pressure in the back corners. Since he was volleying so often, every time I went into the back corner to retrieve one of his volley lengths I had to run right back behind him on the T just in case he decided to take it in short.

His lengths were hit hard and a good couple of feet below the service line, I'd often have to scramble to get them if they were going to bounce twice before hitting the back wall. If they did reach the back wall after the first bounce, it was often pretty difficult to dig them out.

It was truly exhausting.

When we played full-court rallies and it was my turn to wait at the back door, it was really cool to see how effective Richie's game was from a third-person perspective. The accuracy of his lengths basically meant that Cai didn't have any chance to do anything with the ball.

Richie was incredible at dictating the rally and it became pretty evident that he was just practicing his lengths against us. Every now and again he'd take the ball in short and straight with extreme accuracy too.

I just felt like I was running around Richie from corner to corner while he was on the T. The main thing I learned from this training session was how important it is to keep my cool even when under significant amounts of pressure in a rally. At first, I was scrambling to get the ball and then just trying to whack it as hard as possible to get it past Richie.

I quickly realized that this was just making things worse for me since my hard shots are never as accurate and it proved to be extremely tiring. I started trying to lift the ball and take as much time as possible in the back corners in an effort to get the ball past Richie.

I would focus all my mental energy on making sure my length was as tight as possible. That was pretty much the only thing that was on my mind if I was going to play a drive, otherwise, I would get punished again and again.

It's not often I feel that focused on one thing during training (and especially during a match), but, after doing this for a while, I saw major improvements in my length game and I began to hit the ball past Richie a bit more often.

I also learned that, against players who are better than you, you don't get any cheap points. Richie made almost no mistakes throughout the session. Even when I got the ball past him and got him under some kind of pressure, he'd do the same back to me but better. He didn't give me an inch of opportunity.

I had to make every single shot count. On the very rare occasion, he hit a shot that I might be able to capitalize on, I felt under so much pressure to utilize it that I'd often make the mistake when trying to take it into the front myself.

Training with Richie definitely gave me some clarity on how important the basics of the game are. I've written a lot about unorthodox shots and tactics in our newsletter recently, however, this session thoroughly reminded me that, regardless of what shots you've got up your sleeve, it doesn't override the importance of a solid, tight, length game.

I think this speaks volumes about playing players who are better than you. I feel like I learned and developed so much from just a couple of hours on the court. If you can get on court with people above your own standard, I'd highly advise it as it's one of the best ways to up your game.

Most players will be happy to jump on court with you and there's certainly no harm in asking.

I did ask Richie afterwards if he felt like that session helped him at all and he said it did (although I imagine it won't be to the same extent it helped Cai and me). He said he doesn't usually volley that often but that it was something he wanted to work on and we helped him do that, which is cool. It was a win, win, win situation!