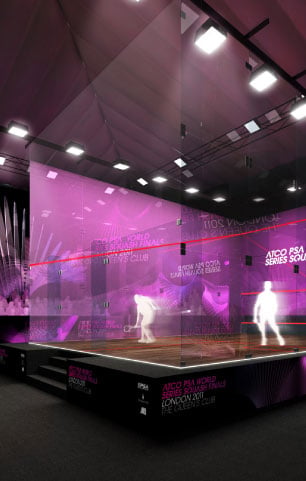 Gaultier has been on in very fine so far this tournament.  In particular his match against James Willstrop was highly competitive and top quality squash. He managed to beat Willstrop who was the #1 ranked player of all of 2012.

Nick Matthew needed a win yesterday. After having lost his first match against Amr Shabana he found himself in a must win match for the rest of the group matches.  Not an enviable task but one that he took on and succeeded at.  He took advantage of the loose play of Shorbagy in his second match and closed the match in 2 games.  He was able to get past Peter Barker in 2 straight games as well.

James found himself in a must win situation yesterday as well having lost to Gaultier in the second round of group play.  He played Simon Rosner yesterday and managed to close out the match in 2 straight games and should be fairly fresh for today's match.

Amr's match yesterday was probably the hardest match on paper and it lived up to its billing.  He was up against Mohamed el Shorbagy who no doubt wanted was really up for his match with Shabana.  Amr had already qualified for semi's but came out determined as ever to get the win yesterday.  Off all the players in this tournament he has been in the best form so far and is the defending champion.  Can he retain the title or did he expend a little too much energy yesterday?

I am really excited about the second semi-final.  Amr has been playing so well having gone undefeated so far.  Willstrop though is such an incredible tactician on court and may well be able to contain Shabana's brilliant attack.  My pick is Willstrop in another tightly contested match setting up an all English final.

If you have any thoughts about today's semi's leave a comment below.