I was watching Ramy Ashour play Adrian Grant this morning on www.psasquashtv.com and was amazed at how deceptive he was in particular when the ball was played in short on the forehand side. His racquet preparation looks identical between a drive and a drop which makes reading what he is going to hit nearly impossible. There was a terrific video on squashskills.com featuring Jonathon Power where Jonathon went over that very subject.

The key points that I got out of this is being on the ball early to give yourself the choice of shots and the racquet preparation being the same for both the drop and the drive. Jonathon talks about having it in a 3/4 position. There was a great Facebook post from Squashskills as well featuring Jonathon playing against Peter Nicol where they showed two images showing Jonathon prepared to hit a drop in one picture and one to hit a drive. Looking at both it is nearly impossible to figure it out. 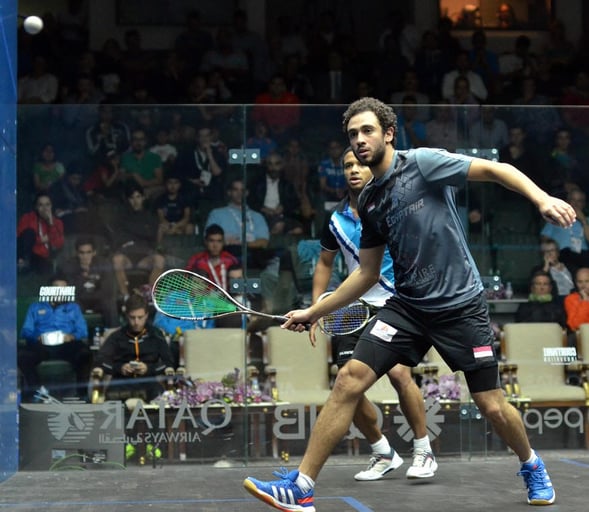 Looking at that picture it is hard to image that Ramy could hit a drive from that position but seemingly he can. I can only imagine how difficult it must be for his opponent to figure it out. Ramy and Jonathon are both incredibly deceptive players. They both get on the loose ball very quickly and both have very similar, if not identical racquet preparation for the drop and drive. How far they take the racquet back definitely differs but the results are the same. They often leave their opponent stuck on the 'T', flat footed, and without a clue whether the ball is going to played in short or driven past them.

So what can the average squash player get out of this? Most of us could not generate enough racquet head speed from Ramy's set up to drive the ball past our opponent. What I believe to be important is to have a set up going in to the front court from which you can actually drive or drop the ball effectively and to set up that way consistently when approaching the front corners. If you can do that you will keep your opponent guessing and hopefully you too can leave them stuck on the 'T' without a clue where your shot is going.