The 4 Elements of Squash Fitness and How to Improve Them

It's no secret that squash is a pretty tough sport. For someone who's never played, the ball feels a bit weird, the racquets feel way lighter than a tennis racquet, they're trapped in a strange square room, and they usually run around like a maniac trying to learn the correct way to move back to the 'T'.

But then, you start improving, fast!

It doesn't take long before you have the movement and swing more or less understood, then comes the fitness side...

I say it time and time again, I always feel like the sheer intensity of the workout I get from a squash match feels like cheating because of how enjoyable it is. Going for a run can sometimes feel like a chore, but you actually look forward to playing squash and the level of exercise you get from a good squash match is almost unrivalled!

The reason squash fitness is so tough is because it incorporates every single aspect of fitness. I'm going to cover 4 of the main aspects in this blog post and give a few tips on how to improve them.

Before I start, it's important to mention that it can be so tough to maintain each of these 4 elements. If you neglect just one, it can seriously damage your performance and your chances of winning, and, it can also lead to frustrating injuries.

Obviously, skill is also a huge part of squash, your racquet work and footwork are both really important parts of the game. For this blog post, I'm going to try to focus fully on fitness and keep those elements separate.

Pushing off the 'T', changing direction, lunging in, and coming back out of a lunge all require a huge amount of explosive power. These explosive movements can take up a lot of energy, especially if they're not executed efficiently.

When I think of professional players with explosive flare, Miguel Rodriguez and Tarek Momen are the first two to pop into my head. Tarek is known to be one of the fastest movers in the game, this comes from his incredible ability to push off the 'T' and then lunge into the ball. The same goes for Rodriguez.

You've probably also seen Miguel Rodriguez dive on quite a few occasions, obviously, this isn't something you need to practice so don't worry, however, it does demonstrate the sheer power he has. 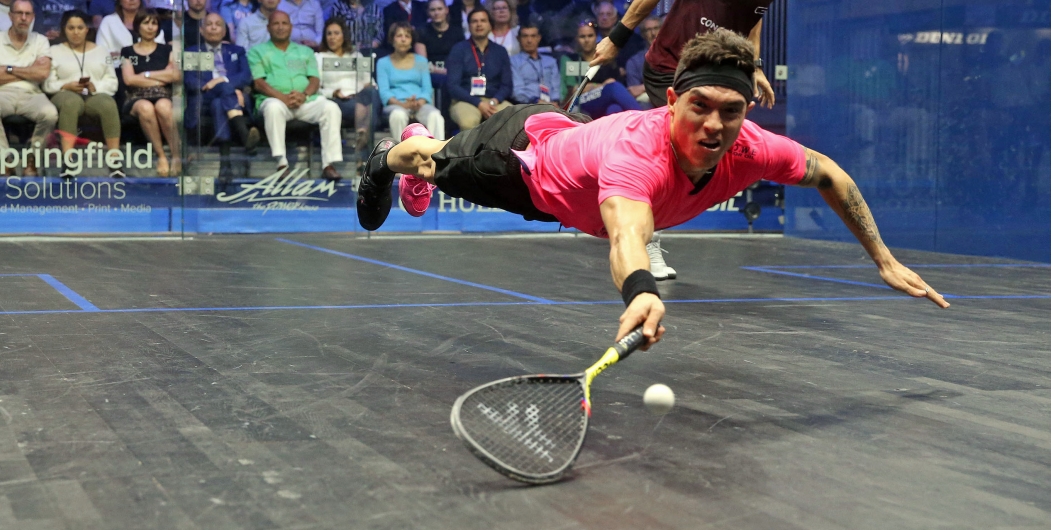 There are an absolute ton of drills you can try out if you want to improve your explosive power and they're usually easy to adapt to your playing standard and fitness level. I'll go through two of my own favourites...

When I was a junior, my coach would always make me do a sort of interval ghosting. At the time, it was absolutely awful, but, it helped my game so much. The drill involved 1 minute of ghosting as fast as I could into the front and back corners, and also either side of the 'T'.

My coach would put cones down and told me not to worry about movement or technique, he said I just had to get to the cone and back to the 'T' as fast as physically possible. He would stand at the front of the court and point to each cone I needed to go to.

I'd usually have a minute's rest between each minute of ghosting, and I'd do the routine about 3 or 4 times before I was on the floor. Brutal but beneficial!

Another option that's a little more technical and less brutal is a kind of mini circuit with a minute on each exercise. Again, there are loads of different explosive exercises you can try, these are my favourites:

The first exercise is squat jumps, for which you'd squat down (like you were doing a squat), then push as hard as you can and jump as high as you can. I'd usually do this next to the wall of the squash court and try to slap a certain part of the red line that I could only just reach repeatedly each time.

The next is fast feet with lunges, this involves sort of running on the sport at about 70% of your maximum speed, and then lunging in, swinging, and pushing out every few seconds (alternating your lunging leg). Try to maintain balance, but also focus your mind on being as explosive as possible. Aim to lunge in and out fast.

The third exercise is one we all know and hate, burpees! In case you don't know, there are a few different variations of burpee, I usually drop into a push-up position (you can do an actual push-up here if you're feeling super strong), then get back onto my feet and jump as high as I can. Do as many as you can for a minute.

Finally, I do a similar one to the squat jumps, but just on one leg. This helps you stay balanced when doing an explosive movement. So do 30 seconds on your right leg and 30 seconds on your left. Squat down and jump and then land, while staying as balanced as possible.

You should get a nice burn from all of these exercises!

By far my least favourite element. Flexibility is vital for lots of reasons, it allows you to lunge further, meaning you can reach tougher balls, it hugely reduces your risk of injury if you don't have tight muscles, and, it reduces muscle pain after a match if you're consistently stretching.

My flexibility is pretty poor, and it's definitely something I neglect. Because I'm still young, I still feel confident that I won't get an injury, but it's just a matter of time! Maybe I should start working on it a bit more...

Anyway, if you take a look at women's squash, you often see certain players like Raneem El Welily and Nouran Gohar basically doing the splits on the court and then managing to still recover back to the 'T'.

This looks absolutely ridiculous and is very tough to do, but it allows them to reach balls that they otherwise couldn't. When it comes to flexibility, there are definitely points at stake!

Obviously, just stretching is the first thing that comes to mind when it comes to flexibility. However, a while back I did 7 days of workouts (which are all on the Control the 'T' Sports YouTube channel if you want to take a look), and one of the workouts is a dynamic stretching routine.

Dynamic stretches involve moving in and out of different positions constantly and pushing a tiny bit further each time. Honestly, I really felt the benefit of doing a few dynamic stretching sessions, I actually felt good afterward.

It's quite difficult to describe dynamic stretches without actually showing someone what they look like. I'll go through two that I found were great for squash and will attach images of myself doing them.

The first is hamstring toe touches. It's quite basic, but really effective. If you take a look at the image below, I would do this position, but alternate on each leg, trying to keep moving all the time. 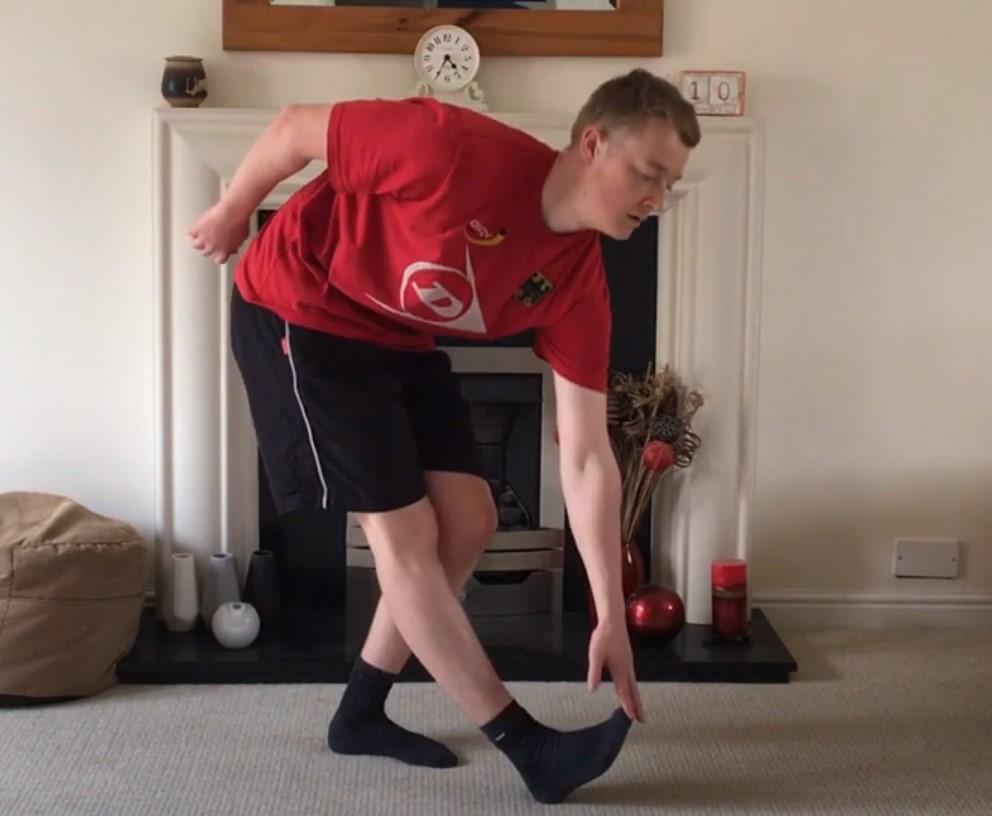 The next exercise I highly recommend is lunge toe touches, this exercise is great for warming up your lateral movement. Again, as seen in the image below, it involves your feet reasonably far apart, but they stay in the same spot throughout the exercise, and you lunge to either side trying to touch your toe each time (don't worry if you can't). 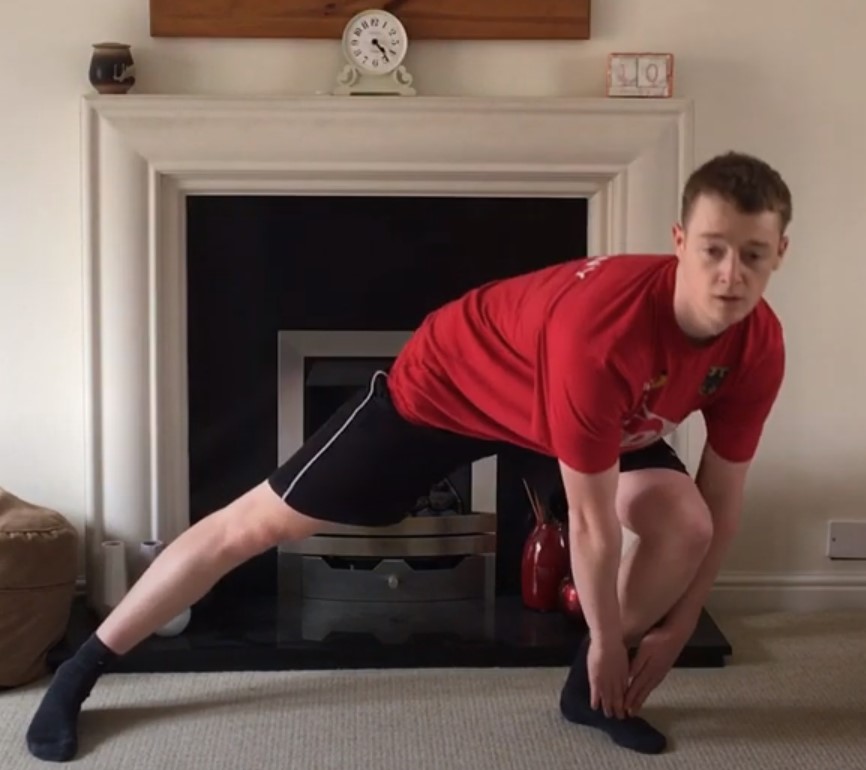 Probably one of the most obvious elements, but still just as important as the rest, physical endurance is huge in squash. Being able to maintain your movement and swing consistently for an entire match can be really draining.

A couple of professional players that come to mind when you think of physical endurance are Paul Coll and Joel Makin. Both players seem to be able to go on forever and grind out some of the longest matches (lasting up to 100 minutes)!

You've probably come across a few players that aren't necessarily technically proficient, they might not be good at playing winners, etc, but their fitness is just so good that it can feel impossible to get a point from them. They just go on forever!

It can be pretty frustrating for your opponent, and really heightens your chances of winning during a close match. If it gets to the fifth game, often this is a battle of endurance rather than shot-making. If you can outlast your opponent physically in a lengthy squash match, it should give you the upper hand.

If you're looking to keep your endurance really squash specific, ghosting is the perfect option. Do a minute of ghosting (at about 60% of your maximum pace), then give yourself 30 seconds rest in between, and do that until you're pretty exhausted. it's a great way to really boost your movement technique, and your ability to maintain it for an entire match.

Movement often deteriorates in the later stages of a match, this can become really draining and often affects other areas of your game too.

Yes, I would class mental endurance as a type of fitness, especially in squash. During a tough match you can be on the court for 40+ minutes, and to maintain concentration and focus without losing it and getting angry can be very difficult at times.

No doubt you've encountered players who are known for losing their temper on the court, and you often see them suffer the consequences as a result. Players often lash out and will go for winners from silly positions and lose points. Keeping a strong head, especially in the final stages of a match, can easily mean the difference between winning and losing.

If you can push your mind to stay consistent and focused on your battle plan for an entire match, you've done a good job! Playing length after length after length it gets really monotonous, but if it's working against your opponent, you've got to stick to it and grind it out.

This seems to be why players in the top 5 in the world rarely (if ever) make silly mistakes. It's actually quite common to see them get frustrated and angry in between points, after all, they're in front of thousands of people, their results directly affect their ranking, and they're in a very high-pressure situation.

However, what the top players are great at is, as soon as their opponent serves, their mind is instantly focused again and back in the game, this is such a tough thing to master, and usually the older more experienced players are far better at it than the younger players.

With regards to improving your mental endurance as a whole, it takes a heck of a lot of time, in my opinion, it's one of the hardest parts of squash to truly master. Other than lots and lots of practice and experience from tough matches, another way to build mental endurance would be meditation. This is something I'm really keen on getting into, I've tried it a few times, but I haven't managed to stick to it.

In the short term, however, deep breaths and just taking a moment to gather your thoughts together can go a long way in a tough mental situation. Even remembering to do this between points or games can be pretty difficult, but if you can drill into your head how important it is and start to do it more regularly it will be hugely beneficial.