The Benefits of a Head Light Squash Racquet

I have been playing with Black Knight Ion Element PSX Squash Racquet this season and must say I love it. It is not the normal type of racquet I have played with for the past few years though. I had been playing with tear drop racquets with a more even or head heavy balance. I like the more natural power they create. I originally tried the Element PSX to get my opinion on it and write a review of it. I liked the feel on contact of it. I really like the thin beam and have come to like the smaller head and sweet spot of the racquet. What I have really come to like is the relatively light weight of it and its head light balance. It is very quick to play with. I find that has really benefited my game. It has helped me to volley more, it has helped me be more deception with my shot selection and I am still able to generate good power. 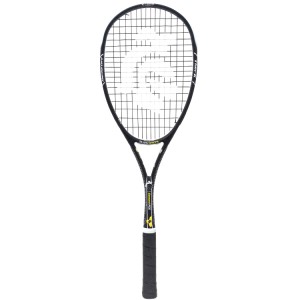 When I am playing my best I am aggressive and volleying a lot of balls. I am putting time pressure on my opponents by taking balls early and trying to not let anything pass me.  I will use the whole court when I volley and will take some balls short but also play lots of balls deep. The light weight and head light balance of the Element PSX allows me to get my racquet back quickly. Racquet preparation has not always been my strongest point of my game and the lightness of the racquet helps me compensate for that by allowing me to maneuver the racquet very quickly. Being able to get the racquet back gives me the option to volley and the option to volley deep with pace. That is critical for me. I grew up playing tennis and when I first started to play squash I would volley a great deal but it was always a punch volley angled down. My opponents, if they were quick and paying attention would soon learn that while I was being aggressive and volleying I was always taking the ball short and they would adjust and would soon be on my drop early and then I was under pressure. I can still take the ball short with my racquet back but I can also drive it long. My opponent has to respect both options. While there is no substitute for excellent racquet preparation, and that is something I do work on, the balance of the Black Knight Element has really allowed to get the racquet back quickly.

Deception has not always been the strongest part of my game. Even when I was playing at my highest level I was successful due to being very quick, very fit and being very aggressive on the volley. Being quick and very fit allowed to cover a lot of balls and really work my opponent and I was quite often able to wear them down and then their level of play would drop while my mine would stay strong. Volleying contributed to working my opponent. What I was not always the best at was hiding my shots. In particular while I could hit a good shot from the front corners it was generally not too hard to figure out what was coming for someone that paid attention. I had a long back swing for a drive and little back swing on the drop. I have shorten my back swing overall now and in particular in the front corners I really have worked on what Jonathon Power discussed on a Squashskills.com video about having a 3 quarter back swing in the front corner. We discussed this in our post titled "Ramy Ashour - Racquet Preparation and Deception". You can still drop and you can still generate enough racquet head speed to drive the ball. The light weight and balance of the racquet is really helping me with this. I am able to generate a great deal of racquet head speed without needing a long back swing. I can snap through the ball to generate pace or from the same racquet preparation take the ball short. My opponent is now left guessing, or at least waiting, now more than they were in the past.

With a racquet that plays light due to a head light balance power is generated by racquet head speed. With a heavier balanced racquet having more of the mass of the racquet directly behind the ball helps generate power. This is the one area that I struggled initially with the racquet. I had a longer back swing and found I was getting ahead of the ball and pulling it when trying to hit the ball. I have had to shorten up my swing and really focus on the contact point.  I have found that if I have a shorter back swing and really focus on the contact point I am able to time the swing correctly to generate pace accurately. It is something I do still have to focus on though as usually my error is in being too fast to the ball and getting ahead of it. My focus now is on making sure to let the ball get to the correct contact point.

I have really found the switch to the Black Knight Ion Element PSX Squash Racquet has been advantageous for me. The smaller control style head has helped with control. The lightweight and head light balance have really helped with my aggressive volley game by allowing me to get the racquet back very quickly. It has helped me with my deception by allowing me to generate excellent racquet head speed with a shorter swing. The biggest adjustment for has been in my drives as I have had to shorten up my swing a bit and really focus on letting the ball get to the correct contact point to keep from getting ahead of it. I have adjusted to that though and am able to generate good pace with a shorter swing. The switch to the head light balanced Element PSX has been a real positive to my game.