The lob and counter drop

Like many squash players I am a member of Squashskills.com and enjoy their training videos and programs a great deal. I have really enjoyed their focus on the lob and counter drop over the past couple of weeks. Covering these two shots in back to back weeks makes a lot of sense as you are in the same court position, at the front of the court for both. You also are in a similar body position for both shots and you hit both shots with your racquet out in front of you. Peter Nicol really does a great job in this video (Squashskills.com membership required) discussing how well the lob and counter drop complement each other. He focuses on the fact the counter drop takes the opponent deep in to the front corner and the cross-court lob takes them to opposite back corner. I want to focus on how having a good counter drop makes your lob easier and more effective. The opposite is true as well, having a great lob makes your counter drop easier and more effective.

I love to lob. I find it gives me more time to get out of the front corner. I also find it very rewarding to hit a lob that catches the side wall just under the out line that ends up clinging to the back wall. Hit perfectly it is difficult to return. You can win points outright and if even if you don't win the point on that shot you have almost always forced a weak shot that you can attack. I recently noticed my lob was not as effective, against people I play regularly. I thought about it and there were a few reasons this could be true. Perhaps I was not hitting the lob as well as I normally do. Or, perhaps they had improved their ability to return the lob. Thinking about it more I realized it was because of their court position. When I went in to the front corners they were hanging back knowing I was most likely to lob. This made it easier for them to take the ball on the volley in the air before it hit the side wall. 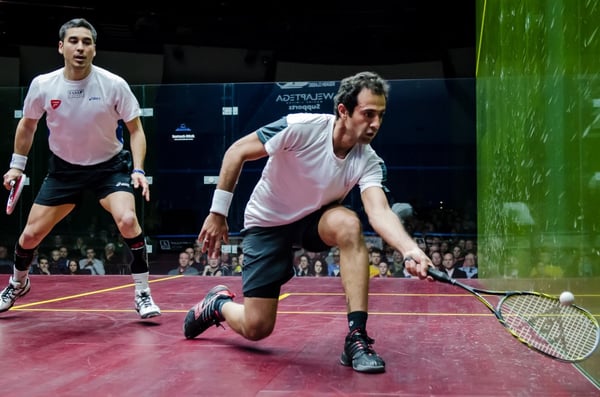 The solution to this is of course is to use the counter drop more. The lob is more effective, and easier to get over your opponent if you can keep them further up the court. If they respect the counter drop, they should play a higher 'T' position to make sure they can cover it. This makes it easier to keep the ball out of their reach when it passes over them and it is much harder to volley a ball if you back peddling. If you can get them to think you are hitting a counter drop and they start to come in, it will make the lob even more effective. They must reverse direction, rush to the back corner making them even less likely to be able to volley the ball. It is also a terribly painful move to have to make as Peter noted in the Squashskills video.

The counter drop is of course made easier and more effective by using the lob. If you never use the lob and always drop once you have your racquet out in front of you in the front corners your opponent will likely be able to read that you are going to drop and can start to come in earlier. This will make it easier for them to cover your counter drop and be on it earlier. The earlier they are on it if it is off the side wall at all they will have more options and will likely end up in an attacking position.