Time to get fit

Following up on our last post about Paul Coll today’s post is going to look at fitness. Squash is a tough game physically and being in good physical shape is imperative to performing at your top level. There are 4 key elements that I want to focus on. The 4 are endurance, core strength, flexibility and explosive power. The reason I am focusing on them now is twofold.  it is just about the new year so a lot of people will be making new years’ resolutions. I am also focusing on them now as I need to work on them myself! Watching Paul Coll’s run at the Channel VAS Championship a couple of weeks ago, really brought in to focus just how far athleticism can take you.

When 2 very equally skilled players compete in squash more often than not fitness will come in to play. If one of the two players are more "fit", meaning they have more endurance, they will often prevail. As you physically wear out on court your shots often deteriorate and your choice of shot often does too. Your shots deteriorate because you are often late to the ball as you have slowed down. Your shot selection worsens because you will often choose a shot to end, or get out of a point not wanting to put any more work in to winning it. The longer you can go without either happening the better your results will be. I believe when people refer to fitness level that is required to play squash, endurance is what they are most often talking about.

Core strength is incredibly important in any sport and squash is no exception. To be able to hit a squash ball consistently accurately requires stability. It is common for average club players to not be stable enough when they have time to set up to hit the ball. At the moment of contact you need to be as stable as possible. I remember a long time ago when playing baseball, a coach correcting a huge hitting problem I was having. I was stepping in to the ball which was correct. Stepping in to the ball helped transfer weight in to the swing. When stepping in though my plain was changing. I was dipping and I was swinging underneath most balls. He had me focus on the position of my head and making sure it did not change during the swing. It was like magic. One tip, a bit of practice focusing on it and my average improved immensely. Squash is very similar you need to be able to deliver the racquet face to the ball consistently in the same place in relation to your body. To do so under no pressure is a function of practice and proper mechanics. To be able to do so when stretched out and having to reach the ball on the lunge is a function of stability. Being stable in those situations often comes down to core strength. 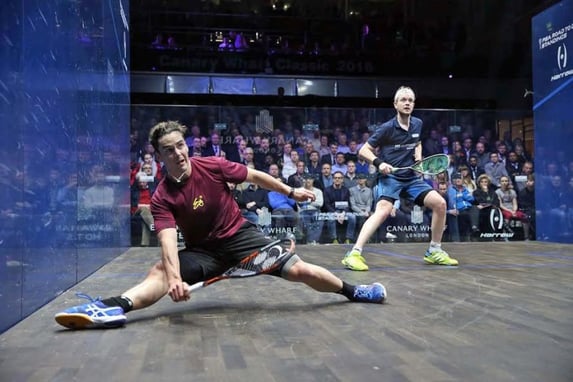 We amateur squash players are often a stiff bunch. You often leave work, hop in the car, get to the club, change in a hurry and jump on court. That is not the ideal warm-up! It often leads to a bad first game as your body warms up, it can also lead to injury as well. It prevents you from being limber enough to stretch out on the lunge to reach a ball.Try to arrive to the club with enough time to do a proper warm up. Being properly warmed up before a match will allow you the flexibility you already have. It will also get you body ready to play you match. Working on increasing your overall flexibility should not be done before a match though. Increasing your flexibility is best to do in training session. Once you are already warmed up you can work on increasing your range of motion. One area important for the squash player is the lunge. The further you can lunge the more balls you will be able to reach and the less steps you will need to take to reach the ball. Not only do you need to be able to reach it though you need to be stable when you got hit it. As noted above that requires good core strength but it also requires the flexibility in your hip muscles and hamstrings to be able to do so. You really need to be able to keep your hips square when lunging to keep your balance and keep stable. Going back to Paul Coll’s win a couple of weeks ago, the flexibility he showed, controlled flexibility at that was what really impressed me the most about his win. I knew he was incredibly fit and I knew he get really stretch but the control over his body he had when doing so was very impressive. He could lunge to the point of nearly doing the splits and still be balanced and hit a quality shot. That is something I know I need to work on. Not that I expect to be doing the splits but being able to lunge further than I can now, in a controlled manner will improve my play.

The ability to be able to cover all 4 corners of the court truly effectively comes from having explosive power from the ‘T’ and for that matter back to it. If your movement is not strong enough you start to have to try and read, and guess, at the shot that your opponent is going to play. If your opponent is deceptive guessing is a recipe for disaster. You really need to be able to wait at the ‘T’ and let your opponent play their shot. For this to be possible you must have the power in your movement to be able to cover all four corners. Reaction time comes in to play in this too but having the strength to explode to the ball is equally important. Strength is equally as important in your movement away from the ball. At the pro tournament we had at our club a few months back I watched a match between a local junior who I know well and a pro. The match was a qualifying match. Watching the match I really thought that the junior was the better, at least more talented of the two players. He is extremely quick and has excellent racquet skills. What was really hurting him though against the slightly older, stronger pro was his movement away from the ball. The pro started to use more drops and an excellent 2 wall working boast. The junior could get the ball but he lacked the power to recover back out of lunge fast enough to get back to the ‘T’ with time to get in position to cover the next shot. The pro realized this pattern was really working for him and managed to get the win. While I do not think you should rush back to the ‘T’ you can't be late getting back to it when you have really had to stretch and lunge to retrieve the previous shot. If you are late recovering to the 'T' you will likely end up doing court sprints and being run around the court. Being persistent, and fit might win you some of those points but in most cases not enough of them to win the match.

Fitness is such a critical part of being a good squash player. Anyone that is looking to improve their play should really look at spending time off court to improve their overall fitness. They should look at not only improving their endurance but also their core strength, flexibility and overall strength. Being on the ball early when given the opportunity and being able to recover back to the ‘T’ when under duress will really help you win more matches. Working on these 4 aspects of your overall fitness will go a long way towards that goal.