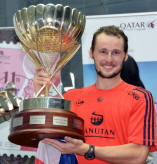 He had great wins over James Willstrop in the finals, Karim Darwish in the semi-final and unexpectedly Tarek Momen in the quarter-finals. For the last year pretty much all of the super series squash tournaments have been dominated by Nick Matthew and Ramy Ashour.  With Ramy having to retire injured and Nick Matthew losing to Momen the draw really opened up.  We got see some different match ups then we have seen recently.  The seeding’s in most of the tournaments have really held true with the 3/4 seeds losing in the semi's.  Gaultier having been outside of that seeding has quite often run into a red hot Ramy or Nick in the quarters.  With both Nick and Ramy out it was great to see Gaultier have a match with Darwish and then Willstrop.

The real strength of Gregory Gaultier's play is his strength of movement.  He is extremely quick to the ball and then back to the 'T'.  Part of this is his how physically fit he is which allows him to keep such a high level of movement deep in to the match.  The biggest part of this though is his leg strength.  Even stretched out he is so strong that he is able to bounce back up and recover incredibly quickly. It is quite astounding to watch.  Even when his opponent has really stretched him out and Greg has made an incredible get he is so quick to get back to ‘T’ that is very hard to win a point.

The confidence he has in his movement really allows him to be aggressive with his play. When playing at the top of his game he has no fear of bringing the ball in short with a drop or a boast as he knows he can cover the next shot even his opponent is quick in to the ball. Not being afraid to move the ball in to the front allows him to relax doing it and player higher quality shots.  This type of play really stretches out his opponents and forces them to do so much work to stay in the match with him.

Gregory Gaultier is a Dunlop player and plays with the Dunlop Aerogel 4D Elite.  It will be interesting to see if he switches to the newer Dunlop Biomimetic Elite model that is current from Dunlop.