Both racquets where able to generate a good amount of power but in different ways. As for the Quicksilver MAX its power is generated from its weight; weighting 135 grams (5 grams heavier than the Quicksilver nXs) with an even balance, this racquet can generate good enough power. Also, it was easier to get the ball to the back of the court with a slower swing which is a great advantage since it takes some effort off the player when swinging.

Hitting with the Quicksilver LT I noticed a big difference on how I was able to generate power with it since it is only 125 grams (5 grams lighter than the Quicksilver nXs) with a slight head light balance. Featuring the first teardrop design of the Quicksilver series: this is where all its power comes from. At first, just by holding the racquet, I thought I would not be able to generate as much power with it but once I took it on court I was proven wrong. This racquet snaps the ball incredibly fast which allowed me to be more aggressive. Also, my low and hard shots would fly by my opponent giving them a really hard time returning the ball.

Each racquet had its own sweet spot in different places. The MAX felt like the whole head was its sweet spot since every single shot felt so smooth on my hands and I felt little to no vibration through the racquet at all. I absolutely loved hitting the ball with this one. For the LT, Cameron took it for a hit first and told me its sweet spot was harder to find as it is higher up on the racquet. This is due to its long vertical strings that come from the teardrop design. But, once I hit with it and was able to hit the ball on the sweet spot, my shots would fly towards the front wall as the trampoline effect due to the longer strings was maximized.

As expected, both racquets are very different when it comes to control and stability. This is because of both the weight and design of the racquet. A heavier, bridged racquet with a thicker beam such as the Quicksilver MAX will generally provide better control than the lighter, thinner teardrop Quicksilver LT. 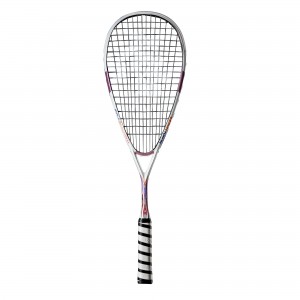 With the MAX, I could feel the racquet going through the ball very solidly thus creating more spin and control on the ball. Also, the bridged design decreases the trampoline effect thus providing less variability in the direction of the ball as it comes off the face of the racquet. As for stability, I will rely on Cameron’s opinion since he uses the previous Quicksilver nXs. The first thing he noticed was how much more stable the MAX was than the nXs; this is due to the MAX being thicker and heavier. He found this feature to be a great improvement from Black Knight as the racquet was much more forgiving while dampening vibrations better.

With the LT it was harder to control the ball which is natural since the trampoline effect is greatly increased by the racquet’s teardrop design. But don’t get me wrong, this racquet was still able to provide good control whenever I needed to hit precision shots. As for stability, being a light racquet with a slightly head light balance, this racquet is a bit less stable; but, an accurate player will find this not to be a problem and will enjoy the racquet’s full potential.

A racquet’s maneuverability can be greatly exploited by a player if the right type of racquet is chosen; this is a very personal choice and each one of these racquets provide their own type of handling that will benefit different types of players.

The Quicksilver MAX being heavier is harder to maneuver on shorter, quicker swings. With a more solid and fluid swing racquet control is remarkably good though. Having said this, a player with a more controlled and fluid swing will find this racquet very helpful. However, a player with a shorter swing looking for a more stable racquet can also benefit from this racquet if they are able to swing a bit of a heavier racquet fast enough. For example, Cameron has a short swing but since he has enough strength to swing the racquet fast, he ended up wanting this racquet over his Quicksilver nXs. 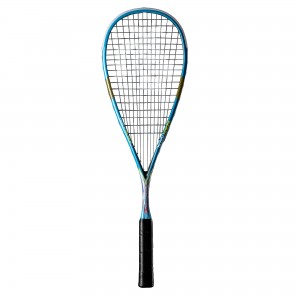 With the Quicksilver LT maneuverability is absolutely amazing; this is not surprising due to the fact that it has a head light balance while weighting only 125 grams. Using this racquet I was able to use very short swings to attack my opponent at the front of the court. I was also able to implement deception much better since I could hold my shot for a longer time. Furthermore, my racquet preparation was much faster which allowed me to intercept shots in the form of volleys at the middle of the court. This is greatly favorable for an aggressive player who likes to put constant pressure on their opponent. Also, someone with a shorter, quick swing with profit from this racquet as well.