A Review of the Black Knight Razor TC Squash Racquet

I decided to take the Black Knight Razor TC Squash Racquet out for a hit the other day. I have hit with it before of course but decided now was as good time to really take it through its paces and to post a review of it. Before we get to the review let's take a look at the specifications of it. 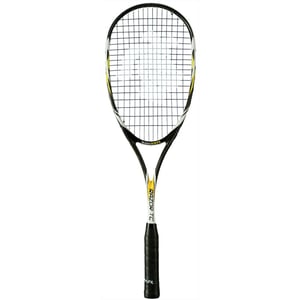 A couple of years ago Black Knight set out to produce a couple of racquets that would compete against the standard Dunlop or Harrow frame shape but at a lower price. The first two models they produced were the Omega and Alpha. They were basically the same racquet with different cosmetics and a 5 gram difference in weight. The Omega is 135 grams and the Alpha 140. Of the two only the Omega carried on being available for a full year. The Omega was fairly successful and Black Knight decided to produce the Razor TC.

The Black Knight Razor TC while having the same frame shape, weight and balance as the Omega features some of Black Knight's more up to date technology and also includes a premium set of strings, Ashaway's PowerNick 19. The updated technology that Black Knight included is their Thermal Core technology. With Thermal Core process Black Knight inserts a tube into the handle of the frame which injects superheated air into the racquet at the same time the mold is curing the fibres from the outside. The result is a uniformly cured racquet from both inside the frame and outside – that is why the racquet is more reactive as well there is less chance of uneven curing that could result in premature breakage.

I think that just about covers the specifications, history and technology of the racquet so now on to the  review. The weight and balance of the racquet are very good. It is not too heavy nor too light it is a good medium weight and having an even balance is a good fit for this weight of the Razor TC. It is light enough to be good on the volley and still has enough mass to help with generating power.

Many Black Knight racquets, in particular the ION series are quite stiff. The Razor TC is not stiff. It is a fairly flexible racquet. This seems to be a deliberate design choice as this racquet really does seem to be designed to compete against Dunlop's racquets or the Harrow Vibe. The flexibility of the racquet makes it a good racquet from a feel perspective. For the player that likes to be able to sense the ball when it is on the string the Razor TC is definitely a good fit.

The head size of the racquet, 500cm2 really helps make the racquet easy to play with. It has an excellent size sweet spot because of its large head size. While not Black Knight's most powerful racquet it has ample power. That is a result of the frame size and large sweet spot but also the Ashaway PowerNick 19 squash strings that are included with it really help with producing power. The thinner strings help generate extra pace and really do cut in to the ball well allowing the player to generate more cut on the ball.