A Review of the Tecnifibre Dynergy AP 125 Squash Racquet

One of the racquets I have been most excited about receiving in the past little while was the new Tecnifibre Dynergy AP 125 Squash Racquet. I was excited to get in for a few reasons. First I thought the Arch Power (AP) technology would really add a new dimension to the Dynergy series of racquets. Having one of the most exciting players in the world, Miguel Angel Rodriguez playing with it I thought would add some real excitement to the racquet as well. It is also the first racquet that Tecnifibre strung with the new DNAMX 1.20 mm. I have taken the Tecnifibre Dynergy 125 AP Squash Racquet out for a hit a couple of times now. I really quite like it! It is quite good for hitting drives and also good on the volley. Touch was also good.

When hitting drives I found that while being light it had enough mass to hit effective length shots. I believe that its slight head heavy balance of 355 mm helps the racquet in this department. Its puts enough of the racquets mass behind the ball to help with hitting length shots. I did find that there was a bit of give in the racquet that was most noticed on off centre hits. On balls hit in the sweet spot I really felt like that ball took off and that the racquet was providing excellent response.

On the volley I found this racquet really help me establishing a good volley to length game. As noted above I really found a lot of extra spring to the ball when catching the ball in the sweet spot. This allowed to allowed me to cut off even difficult balls to volley and keep the ball high and tight with a shorter swing while still get the ball to good length. Having the confidence to do this allowed to hold the T more effectively which is definitely a positive.

The touch of this racquet was good as well. I find with light racquets touch can sometimes be a bit tough as you can't feel the racquet head as much in your hands. While light the Dynergy AP 125's slightly head heavy balance moved enough weight up in to the head to allow me to feel the head of the racquet enough to control my short balls. This allowed me to play effective drops and counter drops. 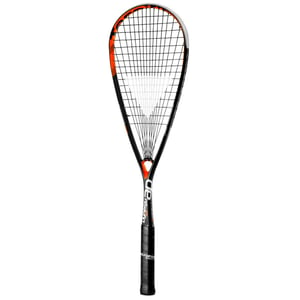 One other aspect of the racquet that I think is worth touching on is the string pattern. The Tecnifibre Dynergy AP 125 features a 16 x 16 string pattern that fans out from the arch in the throat of the racquet. As such it is a fairly open string pattern through the hitting zone up through to the top of the head. This helps with producing power and spin which is a real asset of the racquet. It is similar in this regard to the Powerbite series from Prince although not quite as open. The Prince's Powerbite series feature a 14 x 15 stringing pattern. It is worth noting that with the strings being spaced out as much as they are at the top of the head shear string breaks are a possibility. Shear breaks are when the string breaks right where the string meets the frame. This happens most commonly when a player takes a hard swing at a ball and misses the sweet spot and hits the ball right near the frame of the racquet. The less strings there are to absorb the blow the more likely a string is break.

The Tecnifibre Dynergy AP 125 Squash Racquet is a very nice racquet to play with. I found it be very responsive to balls hit in the sweet spot. It was good to hit drives with, good on the volley and also good from a touch perspective. For a player looking for a good overall racquet and for a racquet that rewards them for hitting the sweet spot and gives them a bit of feedback when they don't this is a great fit.

To learn more about the Tecnifibre Dynergy AP 125 click on the View in Store link below!