Recently I took out the Dunlop Evolution 130 for a hit and I found it to be a very interesting racquet. It features a tear drop design with a small bridge, a dense string pattern (14x18), 130 frame weight, and an even head balance. I played a couple matches with this racquet as I tried to figure out how it played best. A racquet that doesn’t fail to deliver in either control or power and with an even balance, the EVO 130 is great for players who tend to be more patient on court. It also a great feel on contact when hitting the ball as it provides great stability due to its string pattern.

At first, I tried an aggressive approach: volleying on the midcourt, using my wrist more, increasing the pace, and hitting hard and low shots. I found out that this was more challenging to do with this racquet. This is due to its weight of 130 grams and even balance which in reality, in my personal opinion, felt slightly head heavy. Volleying on the midcourt was not an easy task since I was not able to maneuver the racquet very easily and using my wrist put extra stress on my arm. Also, increasing the pace was harder once again due to maneuverability (it was harder to get the racquet ready on time). However, my main focus in squash is speed and accuracy rather than arm strength and power (I get the power from the racquet I normally use) so it is fair to say that this is why the EVO 130 didn’t suit my aggressive play. Having said this, if you are an aggressive player with good arm strength, you won’t find it a problem to maneuver this racquet easily. 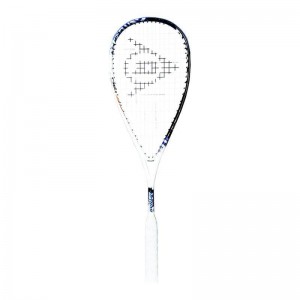 Since aggressive play didn’t work for me using the EVO 130, I tried a more patient approach to the match. I started making more fluid swings and keeping the ball at the back of the court. This worked perfectly since the balance and weight of the racquet allowed me to go through the ball easily without much effort but providing me enough power to get the ball to the back of the court. This was also a more pleasant experience in terms of comfort as I felt great when hitting the ball; the racquet is very forgiving mainly due to its stability but also to its dense string pattern. It also provided me with great feel and control when dropping the ball whether it was from the midcourt or the front court. Another nice thing about this racquet is its head design, which is reminiscent of the Black Knight Quicksilver nXs (tear drop with small bridge), since it helps with power generation. Although I have made it sound like this is a racquet not suitable for aggressive play, this racquet didn't fail to deliver when I wanted to put the ball away; whether it was a loose shot from my opponent giving me time to hit a hard and low shot or a nice and easy drop shot, the EVO 130 gave me all I needed. The reason for this is the racquet’s stability and string pattern which helped me control the ball much easier than with my usual racquet.

In conclusion, this racquet can be amazing in the right hands. Even though it is hard to use aggressively, it is not an impossible task to do. But, if you plan on using it for long and fluid rallies where you want to create opportunities to put the ball away, this racquet will fit you very well. With an interesting design which allows it to have a bigger sweet spot and better stability, this racquet will feel amazing when hitting any type of shot!